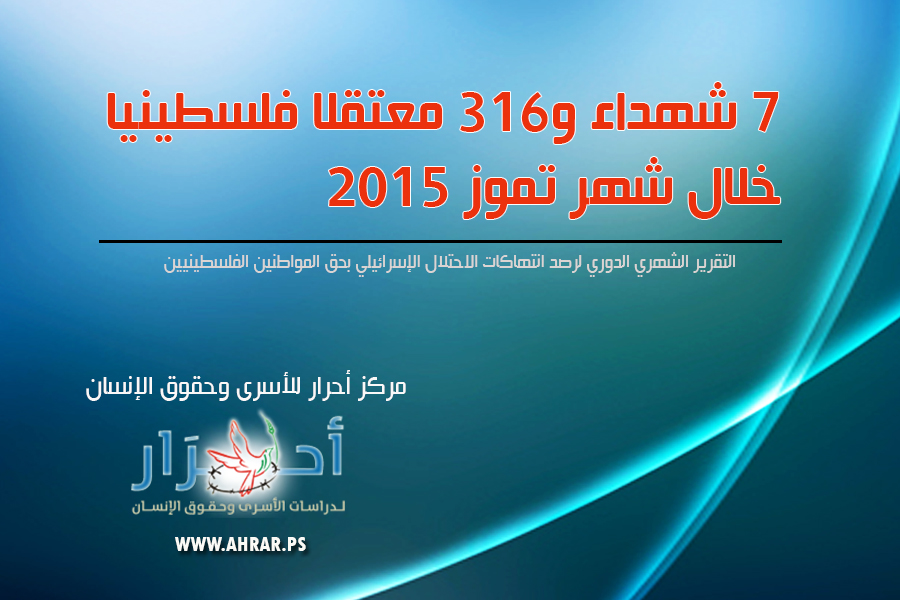 The Ahrar Center for Detainees’ Studies and Human Rights has reported that Israeli soldiers have killed six Palestinians in the occupied territories, and kidnapped 316, while Israeli fanatics have killed a Palestinian baby, in July.Ahrar said the army carried out the majority of abductions in occupied Jerusalem, where they have kidnapped 113 Palestinians, followed by the Hebron district, 57, Ramallah, 42, Bethlehem, 32, Nablus, 31, Jenin, 21, Tulkarem, 5, and 4 in Qalqilia.

Among the kidnapped are 20 children from different parts of the occupied West Bank, including East Jerusalem, and sixteen women, mainly from Jerusalem.

The soldiers also kidnapped 11 Palestinians in the Gaza Strip, including three who were taken prisoner after crossing the border fence, and two on border terminals.

The Navy also continued its violations and attacks against Gaza fishers and fishing boats, and kidnapped six fishers in Gaza waters.

Ahrar further stated that Israeli soldiers, and Israeli fanatics, have killed six Palestinians in the West Bank, and one in the Gaza Strip.

2. Mohammad Maher ‘Alawna, 21, from Burqin in the Jenin district – killed by army fire.

3. Falah Hamdi Abu Mariya, 50, from Beit Ummar in the Hebron district – killed by army fire in his own home.