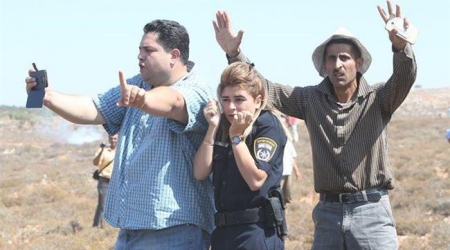 Via the Popular Struggle Coordination Committee’s Facebook page: Video showing the actual story not apparent in the viral picture of RHR Field Coordinator Zakaria Sadah and ‪‎Qusra‬ Mayor …returning policewoman to prevent second officer from shooting Palestinians…‘The bottom line is that, while settlers are calling this an intentional publicity stunt, and some Palestinians are angry with Zakaria and the Qusara mayor for having helped an Israeli policewoman. (The residents of Qusara and the hundreds of additional Palestinians he has helped are not angry with him.)

The fact is that Zakaria may very well have saved Palestinian lives, as another police officer was preparing to shoot. Zakaria is a one person command center who is often the first person to get a call when something happens. He is hated by settlers in the area for having foiled many attempts to attack, threaten, invade and trespass.

On this particular day, he was with reporters in Douma (where he had also been the first to arrive early last Friday morning, and help evacuate the wounded) when he received the call to come quickly to Qusra, because Israelis had descended from the Eish Kodesh outpost and were trying to prevent Palestinians from developing land in Area B by shouting and standing in front of the equipment.

Although the army now acknowledges that this is Area B, where they have no authority to stop land development, when Zakaria arrived, the army seemed to be siding with the Israelis.

In another video posted on Ynet, you see a settler claiming that Palestinians had thrown stones at him. just before the portion of the video here, you see a police officer speaking with the Israelis. This officer, then, comes over and attempts to arrest Palestinians. Quickly he starts using a taser and, then, the Palestinains do start throwing stones.

The frightened policewoman froze, began to cry, and got caught in between the Palestinians, on one side, and security forces with Israeli citizens on the other. She wasn’t hurt, but rocks were falling near her from one side, and tear gas and stun grenades from the other.

Sensing that she was in danger, the police officer in a t-shirt, whom we see later extending his hand to take the policewoman, prepared to shoot at Palestinians.

You then see Zakaria and the Qusara mayor escorting the policewoman and the other officer extending his hand to draw her to him.’

08/04/15 (Press TV/Al Ray) In this picture, which was posted on social media websites last week, two Palestinians can be seen protecting a female Israeli police officer from a group of stone-throwing Israeli settlers.

Shaul Golan, an Israeli photographer, took the picture during clashes between settlers and Palestinian farmers in the illegal Israeli settlement of Esh Kodesh in the West Bank on Saturday.

When Israeli police forces arrived on the scene to break up the clashes, the settlers started throwing rocks at them too.

According to the UN Office for the Coordination of Humanitarian Affairs, settlers frequently attack local Palestinian villages and prevent farmers from reaching their lands.

The Israeli regime maintains a defiant stand on the issue of its illegal settlements on Palestinian land as it refuses to freeze settlement expansion. Tel Aviv has come under repeated and widespread international condemnation over the issue.