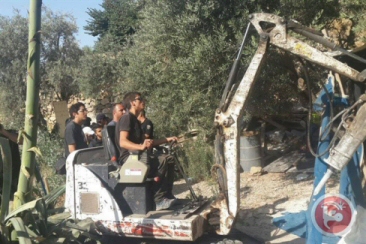 He said that the building consisted of two meeting hlls, four offices and additional utilities measuring 220 square meters in total.

Abu Diab said that part of the building was constructed in 1971, and another part measuring 100 square meters was added on in 2013.

He said that he had tried to obtain the necessary permits from the Israeli authorities for the additional structure, but said that the Jerusalem municipality decided to demolish the entire building rather than give him a license.

Abu Diab said that he started to refurbish the building about five months ago.

According to the Applied Research Institute – Jerusalem, 98 percent of Qalandia’s territories are classified as Area C.

Under the 1993 Oslo Accords, building permits must be approved by the Israeli Civil Administration for Palestinians to build in Area C.

As a result of rarely-approved permits, however, Palestinian residents are often forced to build structures without permits, which are liable to be torn down later by Israeli forces.

According to the Israeli Committee Against House Demolitions, Israel has demolished at least 27,000 Palestinian homes and structures since occupying the West Bank in 1967.