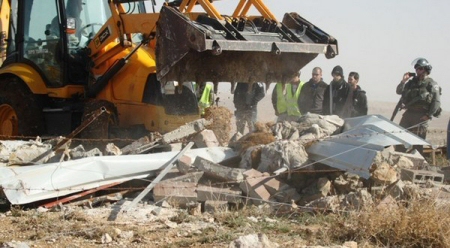 Israeli forces, on Tuesday morning, have demolished three residential structures near the Hamra military checkpoint, central Jordan Valley.Jericho governor Majd Al-Fityani said, according to the PNN, that soldiers tore down three homes, displacing three families who were living in them.

Al-Fityani stated that these arbitrary acts were not the first of their kind.

“The valleys have always been targeted and violated by Israel’s ethnic cleansing policies and continuous evictions. These evictions aim to allow Israel to invest in the area on both military and settlement levels.”

The governor warned that numerous Bedouin groupings are now threatened with eviction from their homes in the Jordan Valley region.