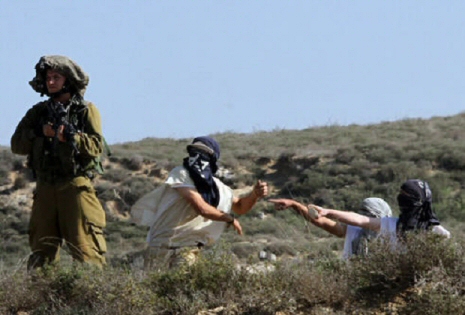 Jewish Israeli settlers, at dawn on Tuesday, used molotov cocktails in an attempt to set fire to a public park in the northern West Bank village of Qaryut.Local Palestinian sources said that a number of settlers arrived in three vehicles at 2 am and threw several molotov cocktails into the park before fleeing the scene.

According to Days of Palestine, number of Palestinian youth spotted them and tried to chase them, but the perpetrators sped away in a vehicle. The fire was immediately extinguished. No casualties were reported.

Residents of the nearby village of Beita said that settlers tried to carry out a separate attack there, but locals noticed them and managed to quell the attack.

Settler violence has come under international scrutiny in recent days following a deadly attack on the village of Douma, on July 31, which killed an 18-month-old Palestinian toddler and his father.

The crime sparked international outrage, although many Palestinians have pointed out that settler attacks are common and often go unpunished by Israeli authorities.

Israeli settlers have carried out at least 126 attacks on Palestinians in occupied East Jerusalem and West Bank since the start of this year, according to the UN Office for the Coordination of Humanitarian Affairs (OCHA).

Palestinian olive groves, along with other agricultural lands and structures, are regularly targeted by Israeli settlers, most often with full complicity and even protection of Israeli soldiers and police.

According to Israeli human rights group Yesh Din, only 1.9 percent of complaints submitted by Palestinians against Israeli settler attacks ever result in a conviction.