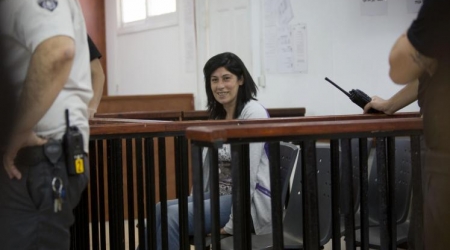 Ofer Israeli Military Court has decided to keep Palestinian MP Khalida Jarrar in custody without charge, refusing to release her on bail.According to Al Ray Palestinian Media Agency, the judge at Ofer Court postponed the hearing due to the absence of the witnesses for the third session in a row.

Addameer stated that the court has decided to keep Jarrar in custody until it accomplishes court proceedings.

Director of Addameer’s legal department, Mahmoud Hassan, said that the defense lawyer objected to not bringing the witnesses before the court, which hinders the completion of the hearings. This procedure will extend the arrest time and violate her right to a fair trial within an appropriate time frame.

Hassan considers the court’s decision to not release Jarrar a violation of the principle that any accused is innocent until proven guilty.

Israeli occupation forces arrested Jarrar last August, after storming her house in al-Bireh and ransacking its contents. No clear charges have been directed to her case. She previously refused to apply to the court decision of being deported to Jericho.

Khalida Jarrar is a Palestinian feminist, human rights activist and senior lawyer for the PLO. She is a member of the Popular Front for the Liberation of Palestine (PFLP) and the Palestinian Legislative Council (PLC).
She was elected to PLC in January 2006 as one of the PFLP’s three deputies and has continued to serve as an elected representative ever since.

She is also the Palestinian representative on the Council of Europe and is currently head of the Prisoners Committee of the PLC. She played a major role in Palestine’s application to join the International Criminal Court. On April 2, 2015, she was arrested and held in administrative detention.