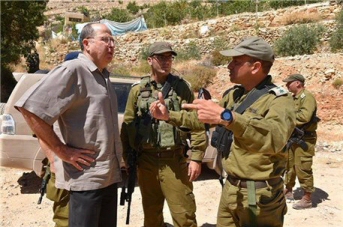 Israeli Defense Minister Moshe Ya’alon, Tuesday morning, broke into the Ibrahimi Mosque in the Old City of Hebron.WAFA correspondence reported that Ya’alon broke into the mosque under tightened security protection.

It was further stated that, in anticipation of Ya’alon’s provocative visit, Israeli forces closed down all of the old market gates leading to the mosque, effectively denying Palestinian Shari‘a Court employees as well as Muslim worshippers access into the mosque.

The Mosque caretaker Munther Abu al-Feilat denounced Ya’alon’s act describing it as an attempt to obliterate the Palestinian and Islamic nature of the mosque and the Old City of Hebron.

This came after Israeli authorities decided to deny Muslim worshippers access into the mosque while allowing Jewish settlers to force their way into it, from Wednesday 10am to Thursday 10am, purportedly for celebrating the first of September as it applies to the Jewish calendar.

Baruch Goldstein, an extremist settler from the illegal settlement of ‘Kiryat Arba’ settlement, who holds US and Israeli citizenship, opened machine-gun fire at Muslim worshippers during prayer. He killed 29 people and injured 135. On the same day outside the mosque, the Israeli army opened fire towards fearful and panicky worshippers and killed at least ten civilians.

Following the incident, al-Ibrahimi Mosque was converted into a military post and later divided into two parts, one for Muslims and another for Jews. Thus the mosque became a point of conflict and constant tension that has marred its sanctity.