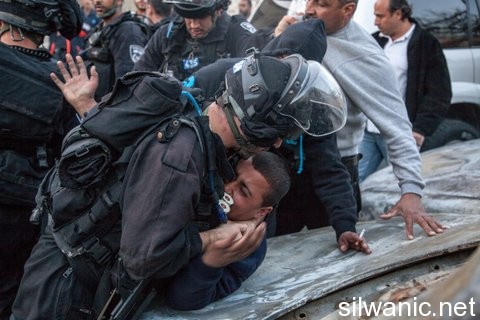 Israeli forces abducted, early Wednesday, nine Palestinians and summoned another from West Bank districts, said security sources and an activist.WAFA correspondence stated that Israeli forces raided a Hebron city neighborhood, where they proceeded to detain a Palestinian after breaking into and ransacking his house. The detainee was identified as Nasim al-Qawasma, 34.

Forces also raided al-Jilda and Adh-Dhaher localities in Beit Ummar, a town to the north of the city, where they broke into and ransacked several houses, according to Media Coordinator of the Anti-Settlement and Wall Popular Committee Muhammad ‘Awad.

During the predawn raid, forces kidnapped three Palestinians and summoned another, raising the total number of detainees from the town since the first of August to 11, including 5 minors.

Israeli soldiers also detained Mu‘taz Bahar, 17, and handed his father a notice ordering him to appear before Israeli intelligence in Gush Etzion detention and interrogation center.

The other two detainees were identified as Muahannad, 15, and Bara’ Abu Maria, 16.

The detainees were identified as Muhammad Hannun, 21, and Mu‘ath Shehadeh, 20, both from Balata refugee camp.

Furthermore, forces raided Burqa, a village to the north of the city, where they detained a Palestinian identified as ‘Abdul-Qader Salah.

In the meantime in Qalqilia district, forces raided Jayyus town to the northeast of the city, where they broke into and ransacked a house.

The house owner was identified as Muhammad Salim. No injury was reported during the predawn raid.

Meanwhile in Bethlehem district, forces raided Taqou‘ town to the east of the city, where they stormed and ransacked several houses. The homeowners were identified as Mousa, Majed, Jamal and Ahmad Ash-Sha‘er.

No injuries were reported during the raid.

In the meantime in Jerusalem, police abducted two Palestinians from the inside Al-Aqsa Mosque compound.

Police detained a Palestinian young man at Al-Silsila Gate leading to the compound and transferred him to al-Qashle detention center in the Old City. The detainee was identified as Tamer Shala‘ta, a Palestinian from the Galilee town of Sakhnin.

Meanwhile, a group of 15 Palestinian Muslim women were denied access into the mosque compound for the second consecutive day.

This came as groups of Jewish settlers, under the protection of police, forced their way into the compound via al-Maghariba Gate (Moroccan Gate), compelling Palestinian Muslim worshippers to confront them.

Police also physically assaulted and detained a Christian Palestinian young man who barricaded himself with Muslim worshippers to keep away Jewish settlers.

The young man, a Christian who was not identified, was detained after losing consciousness as a result of being brutally assaulted by police.

Police also prevented a Palestinian child’s entry into the holy site for two weeks. Muhammad Bayya‘, 13, was denied access into the compound for two weeks and placed under house arrest.