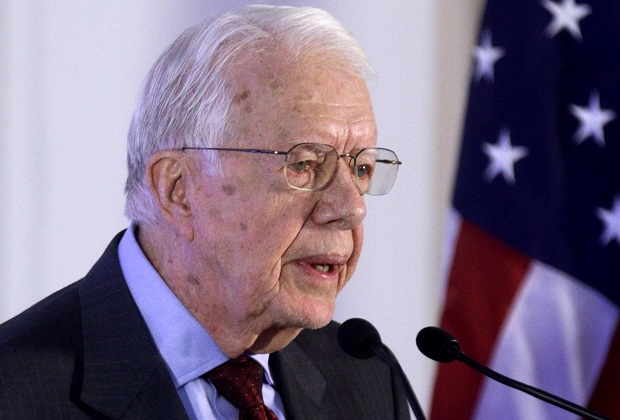 Former US president Jimmy Carter said, recently, that the two-state solution has “zero chance” of being realized in the present day, pointing to Israeli PM Benjamin Netanyahu for the plan’s failure.In a wide-ranging interview with Prospect Magazine published on Thursday, Carter accused Netanyahu of adopting a “one-state solution,” and lamented that the “US had withdrawn” from making further efforts.

“These are the worst prospects for peace between Israel and the Palestinians for years. At this moment, there is zero chance of the two-state solution,” Carter said.

Carter, who served as US president from 1977 to 1981, said he believes that Netanyahu has no intention of pursuing peace, and lamented that “They [Palestinians] will never get equal rights [to Israeli Jews, in a one-state solution].”

Netanyahu “does not now and has never sincerely believed in a two-state solution for Israel and Palestine,” Carter added.

He noted that when he visited the Israeli occupation and the occupied West Bank in April, he did not bother to contact Netanyahu for a meeting, on the grounds that “it would be a waste of time to ask” — expecting that the request would be rebuffed as were previous ones.

The former president and Nobel Peace Prize winner gave the interview ahead of the launch of his new book, A Full Life: Reflections at 90, and shortly after he announced Wednesday that he has been diagnosed with cancer. He will turn 91 in October.

Responding to a question on the use of the term ‘apartheid’ in relation to the Israeli occupation, Carter said that he is “reluctant to use that word in a news article” but asserted that the argument has legitimacy because of demographic changes in the Israeli occupation and the West Bank.

Either “Palestinians will have a majority in government, or you deprive them of equal rights,” he noted, suggesting that the Israeli occupation would not accept a Palestinian political majority.