Brushing Your Teeth with White Phosphorus? 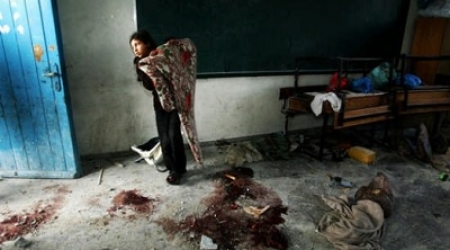 One year ago, on 15 August – 40 days into Israel’s 51 day monstrous assault on Gaza that was clocking up 1800 innocent Palestinian deaths – Adrian Orr, the CEO of the New Zealand Superfund (NZSF) took a cheap shot, a morally cheap low shot, at concerned young protesters who chained themselves in the NZSF office demanding that the NZSF immediately divest from Israel Chemicals (ICL) – a supplier of lethal white phosphorus to the US army for the manufacture of munitions sold back to Israel to barrage fire and death on Gaza.In response to spokesperson Nadia Abu-Shanab’s passionate urging for divestment, Adrian Orr’s smug retort was: “Do you brush your teeth? ( Nadia: “Sorry?) “Do you brush your teeth? White phosphorus is used in many places.”

Orr is not stupid. Paid 800k NZD per annum, he knows that phosphate is used in toothpaste, whereas the pure evil of white phosphorus, derived from phosphate through an industrial process, is so highly reactive to oxygen it has to be stored under water. Exposed to air, it sears human flesh to the bone, damages the immune system and causes neurological damage.

Nadia then goes on to say, “Palestinians have actually identified the company”, and Orr butts in with appalling callous flippancy: “I can identify lots of companies that annoy me in life.”

Annoy? Annoy? Annoyance is not how Mus’ab Almadani’s feels about Israel Chemicals supplying the white phosphorus that seared the innocent flesh of his little son Hamza, 3. The terror and agonising pain has branded horrific physical, emotional and psychological scars on Hamza for life.

This offhand comment glosses over the evidence that ICL’s white phosphorus is integrated in munitions used in Gaza: “The Army contracting Command – Rock Island (ACC-RI) has awarded contract W52P1J-13-P-3004 for White Phosphorus to ICL Performance Products LP, used for the Ctg 155mm M110A2.”

Notwithstanding, Orr and NZSF have dug in, refusing to exclude Israel Chemicals because they “draw a distinction between a company being directly and materially involved in an activity, versus being a supplier of materials or services in the normal course of business.”

That argument wouldn’t go down well with any drug enforcement agency regarding overseas suppliers exporting pseudo-ephedrine and ephedrine for methamphetamine manufacture.

NZSF is a government body and so Orr is dutifully following NZ government policy that goes easy on Israel’s genocidal assaults on Palestinian families. Prime Minister John Key, on July 22, 2014, two weeks into Gaza’s hell, parroted the stale Israeli propaganda that Israel had ‘the right to defend itself’ [but not Palestinians, not Hamza] in a conflict between two equal sides. Seriously equal??? – high tech Israeli precision munitions against a people, the majority whom are children, cut off by land, sky and sea versus piddling rockets.

Key’s opportunistic reference to “the kidnapping of three Israeli teens on the West Bank in early June” ignobly suggests the Palestinians are to blame. This is boosted by his devious omission that Israel had killed 16 Palestinians, including 4 children, in the West Bank from January to June 2014.

Key’s pro-Israel bias clones the bias of all western democracies and the UN.

Orr terminates the encounter with the protesters with dismissive bureaucratic pragmatism: “We need to get on with business, we heard you, I will be thinking hard about it.”

In his hard thinking Orr must also consider Bank Leumi for divestment. It has an 18% stake in Israel Chemicals.

Orr has had exactly a year to think about it. One hoped in his contemplation he researched Mads Gilbert’s ‘Night in Gaza’ or Mohammed Omer’s ‘Shellshocked’ or
Atef Abu Saif’s ‘The Drone Eats with Me’ or Max Blumenthal’s, ‘The 51 Day War: Ruin and Resistance in Gaza’.

On August 3, 2015, sixty principled protesters rallied outside the NZSF building in Auckland to assert that investment in Israel’s barbaric business of death was not to be done in their name.

Orr refused to meet with them. Seems NZSF staff have acquired the knack to sleep easy (deaf to the cries of Palestinian children) while working for a company, on behalf of the pro-Israel NZ government, that invests in Israeli war crimes.