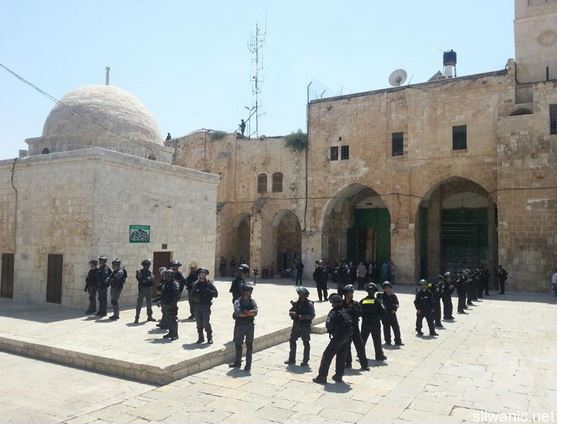 The Israeli Police have decided, Wednesday, to prevent a Palestinian woman, and four children, from entering the Al-Aqsa Mosque Compound, for periods that vary between 15 and 60 days.Lawyer of the Wadi Hilweh Information Center in Silwan said the police issued an order preventing a child, identified as Isra’ Abu Hadwan, in addition to Yousef al-‘Ajlouni, from entering the Al-Aqsa Mosque area for 15 days, and released them on a third-party bail for 5000 New Israeli Shekels each.

He added that a District Court judge also issued a ruling preventing a woman, identified as Khadija Awad, from entering the mosque compound for 60 days.

A child, identified as Yousef Shaweesh, 14 years of age, and a young man, identified as Hotheifa Shreiteh, received similar orders, this time for 15 days.

The lawyer also said the court ordered the release of child identified as Nour Safadi and Samira Abu Madhi, who will have their hearings at the District Court, Thursday.

A child identified as Mohammad Adnan Mahmoud, remains in custody, until his trial date, Thursday.

In related news, the Ad-Dameer Prisoners Support and Human Rights Association has reported that the District Court in Jerusalem also renewed detention and interrogation orders against Wahid al-Bakri until August 23, while Monir Mahmoud, Mohammad Nasser and Mansour Nasser were remanded until their trial hearing, Sunday.