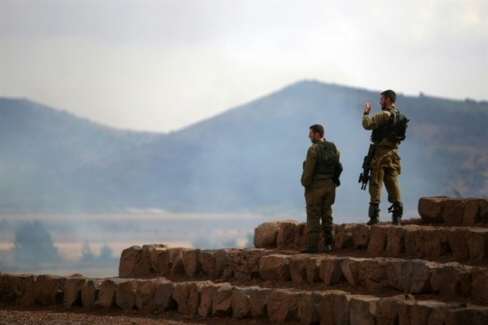 Israel’s army targeted members of the Islamic Jihad group on Friday, in the Syrian Golan Heights, in attacks which killed at least five people.’Aircraft of the Israeli enemy targeted a civilian car in the village of al-Kom, killing five unarmed civilians,’ Syrian state television said, according to Ma’an.

The Syrian Observatory for Human Rights, a British-based monitoring group, also confirmed five people had been killed, saying two pro-regime militiamen were among them.

An Israeli military source confirmed the Friday raids, saying ‘part of the squad responsible for firing the rockets yesterday was targeted and neutralized.’

The source said the raids were believed to have killed four or five people, targeting 14 different military posts.

He said the group targeted was part of the (Palestinian militant group) Islamic Jihad in Syria, ‘acting under the supervision of Iran’.

The attack followed more than a dozen Israeli raids on Syrian army positions in the Golan Heights, on Thursday, which killed at least one person, in response to cross-border rocket fire which Israel blamed on Islamic Jihad.

He added that such reports are ‘malignant’ attempts to divert attention from Israeli crimes against prisoners and hunger striker Mohammad Allan.

Allan — reportedly an Islamic Jihad member — ended an over two-month hunger strike against being held without charge or trial by Israel earlier Thursday.

During a conference held in front of the ICRC headquarters in Gaza, on Friday, in support of Allan, senior Jihad leader Muhammad al-Hind said that the group “resists on Palestinian lands.”

Shihab asserted that Israel seeks to ‘shuffle cards’ and create a reason for a new offensive. Shihab threatened that the movement knows how, when, and where to respond to Israel.

Separately, Democratic Front for the Liberation of Palestine official Saleh Zeidan told Ma’an that his movement condemns Israel’s actions and demanded that the international community intervene to stop the escalation and hold Israel accountable for its crimes.

Israel has carried out increasing strikes inside of Syrian territory in recent months, killing five pro-Syrian regime forces three weeks ago during strikes in the Druze village of Hader along the Syrian-Israeli ceasefire line.