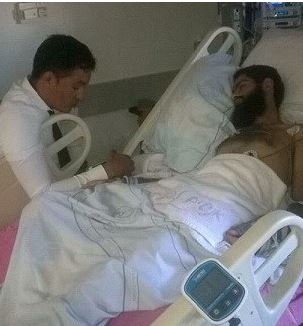 The head of the Palestinian Detainees Committee Issa Qaraqe has reported, Thursday, that the health condition of Mohammad ‘Allan is still considered serious, but is gradually improving, and that Allan is not a prisoner anymore.Qaraqe’ said ‘Allan needs an extended medical treatment, as his health condition is considered serious following 65 days of hunger strike, and that he still requires a lengthy period of medical treatment, yet his health is slowly, and gradually, improving.

The Palestinian official also stated that ‘Allan is not a prisoner anymore, and will be heading back home once he concludes his medical treatment.

Allan’s mother thanked every Palestinian, every person around the world, who stood in solidarity with her son, as he fought his unjust and illegal imprisonment, by conducting an open-ended hunger strike, risking his life to fight for freedom.