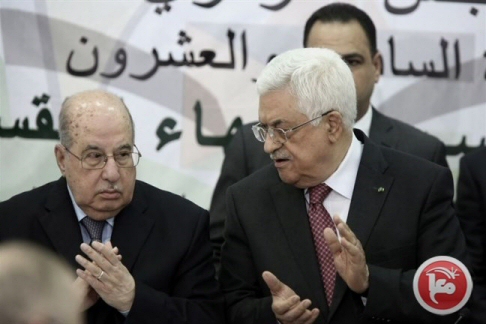 The Palestinian National Council, the PLO’s legislative body, is scheduled to hold an emergency meeting in the next few weeks, to elect new members to the PLO’s Executive Committee, a committee member told Ma’an News Agency.Ahmad Majdalani told Ma’an, overnight Saturday, that PLO institutions would witness major changes.
Majdalani was among 11 members of the Executive Committee, including President Mahmoud Abbas, who announced their resignation earlier Saturday to pave the way for new elections to the committee.

Majdalani said that the Executive Committee recommended that the PNC hold an emergency meeting to elect new committee members within 30 days.

The recommendation is in line with the basic laws governing the Palestinian National Council, Majdalani said.

He added that ‘since 11 members wanted to resign, it is more likely that all members will be replaced.’

All members currently resigning from the committee will be eligible to stand for re-election when the PNC convenes.

Last month Saeb Erekat took office as secretary-general of the PLO, prompting speculation that he is being lined up to succeed Mahmoud Abbas as president of the PA.

Majdalani said the resignations will become effective once the PNC holds an emergency meeting, at which point they will be submitted to the PNC president Salim Zanoon.

An emergency PNC session is held only in cases of extreme necessity, and when one third or more of Executive Committee members leave their posts.

Quorum isn’t necessary for such sessions, Majdalani said, although he added that the coming session will only act to elect new members to the Executive Committee.

He said that the Executive Committee consists of 18 members representing all PLO factions, although he expected ‘independent figures’ to also be elected.

Majdalani added that a majority of PLO factions agreed on the new elections, except a few who gave different recommendations to be studied.

The 740-member PNC is responsible for deciding on PLO policies and electing the Executive Committee, the PLO’s primary executive body.

The last PNC meeting was an emergency meeting held in 2009 to replace six vacant council positions, while the last Executive Committee elections were held in 1996 during a PNC session in Gaza.

Arabic media has speculated that the upcoming meeting could pave the way for Abbas’ resignation from his post as president of the PA.

Last month, PLO officials dismissed rumors of the president’s resignation from office, although sources close to Abbas did not deny the possibility, saying that ‘important, and maybe dangerous, decisions’ are likely to be made in September, coinciding with the UN General Assembly’s 70th session.