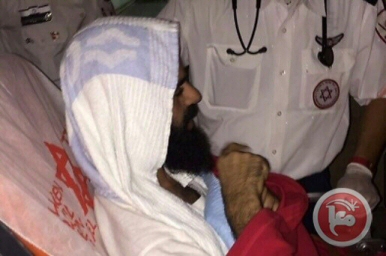 Israeli Public Prosecution informed the Barzilai, on Sunday, not to discharge Palestinian hunger-striker Mohammad Allan.Allan has begun to take food and medicines. However, the medical center had said that he has suffered brain damage, Days of Palestine reports.

The hunger striker spent 65 days on hunger strike and was admitted to the medical center after falling into a coma due to a deterioration in his health. He is now reportedly conscious and aware of everything around him, his health improving.

Israeli Public Prosecution told the medical center that he will not leave until official approval.

Ynet said that an Israeli coordination committee issues daily permits for Allan to remain at the center.

It also reported that an Israeli security guard was placed at the entrance of the hospital in order to prevent Allan from leaving.

Allan’s family was informed that if he left the medical center, he would be punished, and, if the family wanted to move him to another hospital, this must be coordinated by the Israeli security services.

Israel’s High Court, last Wednesday, suspended Allan’s administrative detention order, but said that he must remain in hospital pending a decision on his future.