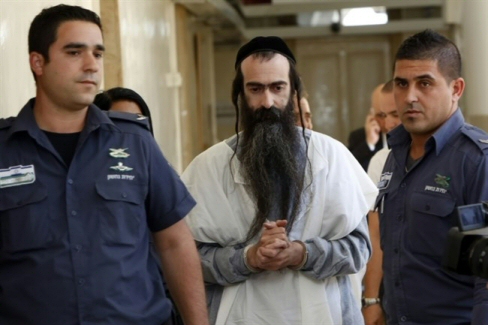 Israel, on Monday, charged an ultra-Orthodox Jewish Israeli man with murder for stabbing a 16-year-old girl to death and wounding five others at a Gay Pride parade, as he lashed out at homosexuality in court.Yishai Shlissel, who was released from prison only three weeks before the stabbing for a similar attack, mentioned the name of the 16-year-old girl killed during his appearance at the court that charged him, Ynet reported according to AFP.

‘The pride parade must be stopped in order for the soul of Shira Banki to ascend to heaven,’ Shlissel, 39 and with a long beard, told the court in Jerusalem.

‘If you care for her well-being… you must stop cursing against God. The parade marchers are bringing great harm upon the nation of Israel.’

Besides the murder accusation, Shlissel was also charged with aggravated assault and six counts of attempted murder over the attack on the march last month in Jerusalem, the justice ministry said.
Shlissel has so far refused the help of a lawyer and said he does not accept the court’s authority, but a psychiatric exam has found him fit to stand trial.

Three weeks before the July 30 stabbing, Shlissel was released from prison after serving a 10-year sentence for a similar attack that left three people wounded.

He had also posted a letter on the Internet speaking of the ‘abomination’ of a Gay Pride parade being held in the Holy City and the need to stop it, even at the cost of one’s life.

The attack has led to criticism of the Israeli security forces, with many questioning how Shlissel was allowed anywhere near the parade. The attack occurred in Jerusalem’s city center as hundreds were participating in the march.

An unrelated attack, hours later on July 31, that saw a Palestinian home in the West Bank firebombed by Israeli settlers, killing an 18-month-old child and his father, focused further attention on Jewish extremism.

The family’s small brick and cement home in the village of Douma was gutted by fire, while a Jewish Star of David was spray-painted on a wall along with the words ‘revenge’ and ‘long live the Messiah.’

Shlissel’s charge comes as many have accused the Israeli government of failing to address the problem of Jewish extremism and of going dangerously far in its support for right-wing settler groups.

No charges have been made against potential perpetrators of the attack against the Palestinian Dawabsha family carried out on the same day as Shlissel’s crime, and several suspects have been released.