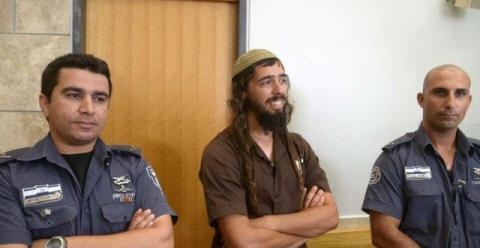 Haaretz Israeli newspaper, on Sunday, said that the Israeli army issued administrative orders against some 10 settlers living in West Bank settlements, and throughout Israel, over the past several days, as part of its ‘crackdown on Jewish extremism”.Haaretz said, according to the PNN, that the orders range in severity from prohibitions against contacting specified individuals to being forced to leave the West Bank. They were issued upon the recommendation of the Shin Bet security service (Shabak) and signed by the chiefs of Israeli military.

On Saturday night, a juvenile male from Ma’aleh Adumim, in the occupied West Bank, and a man from the Tel Aviv suburb of Ramat Hasharon were ordered to stay out of Jerusalem and the West Bank and to remain at home at night, under house arrest, the newspaper added.

In addition, two teenage students from the Bat Ayin and one from Alon Shvut West Bank settlements were ordered to leave the West Bank and to observe nighttime house arrest for six months. One of the teens was also barred from entering Jerusalem.

Israel claims to conduct a ‘crackdown on Jewish extremism” since the Douma attack on July 31, in which 18-month-old toddler Ali Dawabsha and his father were burned to death, where the rrest of the family (mother and brother) lie in critical condition in a hospital.

In response, Itamar Ben Gvir, a lawyer who represents two of the detainees, said that “the defense minister is behaving like a bull in a china shop. By his actions he is conveying a message to young people that there is no democracy, and is encouraging them to break the law, since there are no indictments and no due process,” Haaretz reported.

Following the attack, the Israeli police announced they were unable to identify the Douma arson attacker, and asked for help to find leads to the suspect.

Israeli forces detained an unknown number of suspects, but these were released without providing any details.