Another Palestinian Home Burned in Douma 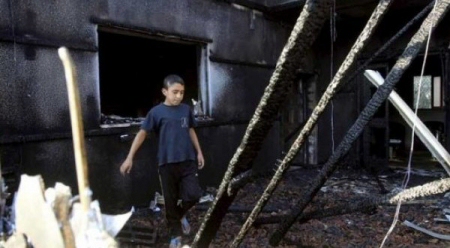 Unknown assailants have set fire to a Palestinian house in Douma village, to the east of Nablus, on Monday; no causalities reported. Locals believe that Israeli settlers are behind the attack. Al Ray reports that the official presiding over the West Bank settlements file, Ghassan Douglas, said that the house of Mnour Dawabsha was burned, causing suffocation among the inhabitants.

They were taken to the hospital immediately.

Civil defense reached the house, put out the fire, and rescued the family members.
Palestinian police have begin an investigation on the incident.

.
Douglas explained that the circumstances of this arson attack is similar to the attack on Sa’ad Dawabsha‘s family, last month, in which one-year boy was burned alive, His father later died of injuries sustained in the fire, while his brother and mother are still in critical condition.

Douglas said that it was too early to confirm the identity of the doers, calling for caution from rushing in charging the settlers, for if it is proved that there is no connection between the settlers and the attack, the Israeli occupation will take advantage to acquit the Israeli settlers of the former crime.