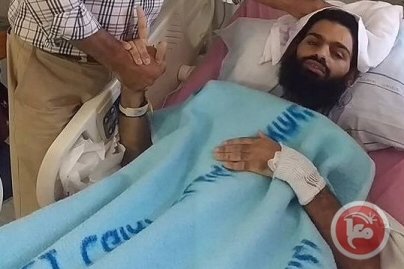 The Palestinian Minister of Health said, Monday, that former hunger striker Mohammad Allan is in a stable health condition and that his health is improving gradually.Jawad Awwad’s statement was released following a meeting with neurologist Adel Misk, who had recently visited and evaluated Allan at the Barzilai Medical Center in Israel where Allan is being treated. Awwad added that Misk evaluated Allan upon Awwad’s request.

Misk said that after evaluating Allan’s nervous system, he found that Allan’s sense of awareness and muscular development was gradually improving after he had suffered seizures due to a dysfunction in his metabolism from the strike.

Mohammed Allan, 31, ended his 66-day hunger strike on Thursday after Israel’s top court suspended his administrative detention. He entered a coma twice before the hunger strike was through.

A spokesperson at Barzilai Medical Center confirmed Misk’s evaluation, telling Ma’an News Agency that Allan is ‘improving, he’s awake, his sense of awareness and strength is improving and he’s responding.’
Misk added that he requested Allan be given new medical tests, including a new MRI scan and a brain EEG.

Allan’s hunger strike has sparked new calls for Israel to curb its use of administrative detention under which prisoners may be held without trial or charge for renewable six-month periods, indefinitely.

Israeli officials claim it is an essential tool in preventing attacks and protecting sensitive intelligence because it allows authorities to keep evidence secret.

However, it has been strongly criticized by the international community as well as both Israeli and Palestinian rights activists.

They say that international law allows for such detention only under extreme circumstances, but that Israel uses it as a punitive measure on a routine basis to circumvent the justice system or as a crutch to avoid trial.

Activists have called on Israeli authorities to charge or release those held under administrative detention.

There are currently 400 Palestinians being held in Israeli jails without charge or trial under the policy.