Vatican and Palestine May Raise UN Flags Before Francis’ Visit 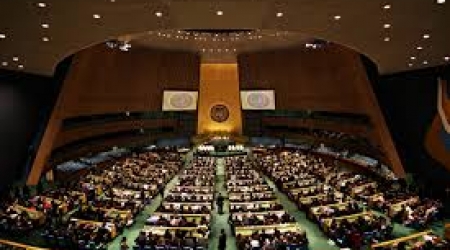 In a move likely to upset Israel’s government, Palestinians and the Vatican are seeking to raise their flags at UN headquarters — just in time for Pope Francis’ visit, next month. According to Al Ray/AP, supporters of the idea hope that the UN General Assembly will adopt a resolution on the flag-raising shortly before the pope arrives.

They’re betting that the United States or other allies of Israel will not block the plan and risk offending the Vatican on Francis’ first US visit. The Palestinian proposal has been tabled, and a draft of the resolution set to be made public was seen by the Associated Press, on We3dnesday. The draft would allow non-member observer states — there are only two — to display their flags with the 193 member states.

The United States and Israel oppose recognizing the Palestinian state, arguing that it undermines efforts to negotiate a peace agreement. This process, however, has largely been at a standstill since the deadly conflict in Gaza a year ago.

Many states have shown support for the Palestinians’ pursuit of statehood, including the Vatican. In May, the Vatican officially recognized the state of Palestine in their first formal, bilateral treaty. Israel’s foreign ministry said it was ‘disappointed’.

During Francis’ 2014 visit to the Holy Land, the Vatican’s official program referred to Palestinian President Mahmoud Abbas as the president of the ‘state of Palestine.’

In 2012, the Vatican welcomed an overwhelming vote in the General Assembly to upgrade the Palestinians’ status to a UN non-member observer state. Their delegation promptly unfurled the flag in the chamber.

Pope Francis has not been shy about ambitious diplomacy.

He helped bring the United States and Cuba together for their historic reestablishment of diplomatic ties. Last year, he invited the Israeli and Palestinian presidents for a day of peace prayers at the Vatican.

Most countries in Western Europe have held off on recognizing a Palestinian state, but some have hinted that their position could change, if peace efforts remain deadlocked. Most countries in Africa, Asia and South America have recognized Palestine.

Francis is scheduled to address the General Assembly on Sept. 25, just before world leaders meet to launch a set of development goals aimed at ending both poverty and hunger over the next 15 years.