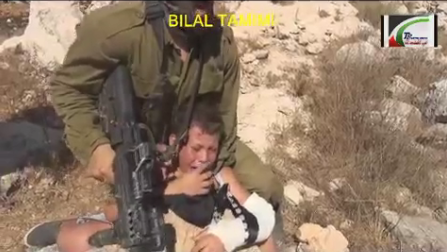 A radical scene unfolded Friday after Israeli forces intercepted the weekly protest in the West Bank village of Nabi Saleh, Palestine against the illegal confiscation of their land and spring. The courageous actions of the Tamimi women of Nabi Saleh rescuing their captured child spread immediately on social media after the UK’s Daily Mail published a series of breathtaking photographs taken at the scene. The event was captured on video by Bilal Tamimi and Royal News TV.As a masked and armed Israeli soldier chases down a hillside you can hear voices yelling, then the unmistakable sound of a screaming child. The boy appears in view as he turns to face the soldier. Screaming, the boy pivots then rushes past the soldier and up the hill through a mass of boulders as the soldier finally catches up with the boy and captures him. Placing the boy in a chokehold the soldier forces the struggling child over a bolder as cameras close in on the scene and record what’s happening. What follows, captured on video and camera, is a sight to behold.

The boy has a cast on his left arm. The soldier briefly loosens his chokehold before tightening his grip again.

The struggling continues over the wild screams of the boy. The soldier, ironically gasping for breath, yells out at the top of his lungs – calling for assistance from his comrade forces – unable to pull off this arrest of the boy on his own. He adjusts his rifle, pulls back the boy’s good arm and shoves the boy’s face towards the boulder, then stands and tries lifting the boy up from under the child’s armpits as the boy’s arms and cast fly into the air he lets out a painful scream. The soldier struggles to contain the squirming writhing boy who’s wildly kicking his legs into the air.

And then the Tamimi women of Nabi Saleh descend on the soldier.

They plunge down on the soldier, pulling him off the child (2: 05). He thrusts them off and struggle ensues, he tackles the boy again as women and girls proceed yanking his limbs, beating his head, biting him, slapping him (while the soldier is yelling for backup), mounting his back, putting a chokehold on his neck, ripping his mask and finally tearing it off his face, unmasking him completely (2:52). Other soldiers enter into the scene and rescue him from the Tamimi women of Nabi Saleh. The boy is fighting him off the whole time.

Note the last scene of the video. The humiliated, defeated soldier draws a teargas canister, arms it, and throws it to the ground.