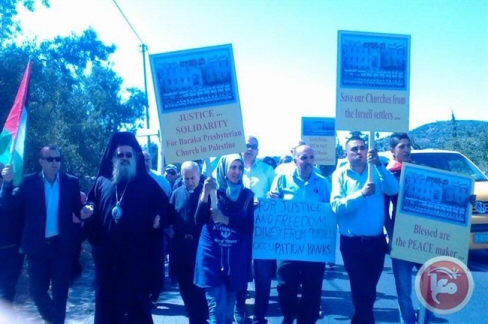 Orthodox Archbishop Atallah Hanna was among a number of political and religious leaders to take part in a march Saturday protesting the purchase, by Israeli settlers, of a Christian church compound in the southern occupied West Bank.The 38-dunam (9.3 acre) compound, known as Beit al-Baraka, is located to the north of al-Arrub refugee camp in the southern West Bank district of Hebron, according to Ma’an.

An investigative report by Israeli newspaper Haaretz in May alleged that an American millionaire, Irving Moskowitz, purchased the site through a Swedish company in 2012 with the intention of turning it into a settlement outpost.

The protesters performed a mass prayer led by Attalah Hanna, the archbishop of the Sebastian Greek Orthodox Church, and Father George Awad.

Awad urged Palestinian President Mahmoud Abbas and the Palestinian Authority to support Beit al-Baraka in its battle against Israeli violations.

Participants said that Israeli forces suppressed the march and prevented them from reaching the church compound.

It was reported in June that Israeli authorities prevented Archbishop Hanna from taking part in another march at the church compound by summoning him to the Russian Compound detention center in Jerusalem.

Haaretz’s investigation earlier this year alleged that a Swedish company established in 2007 had been used to cover up the sale and transfer of Beit al-Baraka in 2012 to a settler organization funded by American millionaire Irving Moskowitz.

A pastor who headed the church that previously owned the compound, Keith Coleman, told Haaretz he thought it had been sold to a Swedish company called Scandinavian Seamen Holy Land Enterprises in March 2008 that would revive its use as a church.

Haaretz discovered however that, ‘the Swedish group was established in Stockholm in 2007, and seems to have been used as a cover for transferring the ownership of the compound to the settlers. The group does not seem to have any offices.’

The Swedish company registered the purchase with the Israeli Civil Administration in 2012.

The company was then dissolved, with ownership handed over to an American nonprofit organization, American Friends of the Everest Foundation, funded by Irving Moskowitz and working towards the eventual ‘Judaization’ of occupied East Jerusalem.

The church lies in a sensitive location, which when settled, will see Israeli settlements stretch all the way from the Gush Etzion settler block south of Jerusalem to the cluster of settlements around Hebron.

There are more than 500,000 Israelis living in illegal settlements across occupied East Jerusalem and the West Bank.