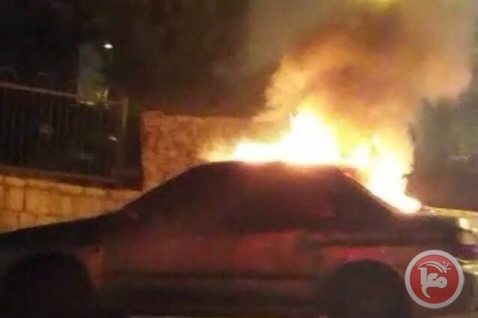 Palestinian youth, on Friday, torched a private car belonging to Israeli settlers in the al-Tur neighborhood of occupied East Jerusalem (Mount of Olives).Witnesses told Ma’an News Agency that Palestinian youths hurled firebombs at a car belonging to Israeli settlers from an illegal outpost near al-Khalwa street in the al-Tur neighborhood, setting the car ablaze.

No injuries were reported in the fire bombing incident.

Israeli forces responded to the incident, storming the al-Tur neighborhood and firing stun grenades “haphazardly” at Palestinian youth,before the forces broke into a Palestinian house looking for suspects, witnesses said.

Israeli border police said they could not immediately comment on Saturday due to observance of the Jewish Sabbath holiday.

Israeli forces on Thursday closed off the main entrance to the al-Khalla area of al-Tur after an Israeli police vehicle was set ablaze in the area on Wednesday.

Palestinians youths in the al-Tur neighborhood threw a Molotov cocktail at a police jeep on the street overnight Wednesday setting it on fire, locals told Ma’an at the time.

An Israeli spokesperson from COGAT had no information on the closure.

Al-Tur residents, along with the rest of Palestinians living in occupied East Jerusalem, face frequent tension with Israeli forces and settlers who have been present in the area since Israel annexed the area in 1967 in a move never recognized by the international community.

Israeli forces often seal off streets leading into the al-Tur neighborhood following clashes, preventing the movement of residents and hindering crucial services such as ambulances and school buses.

Tensions between Palestinians and Israeli settlers have been particularly high in recent weeks after an arson attack carried out by settlers last month in the southern Nablus village of Douma killed an 18-month-old infant and his father. The infant’s mother and brother remain in critical condition.