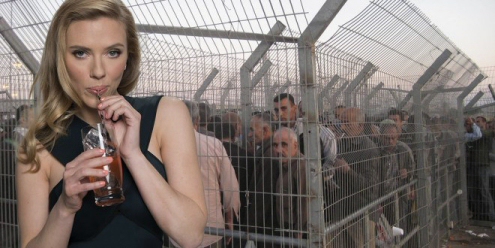 SodaStream announced, today, that it will finalize the closure of its West Bank factory in two weeks.SodaStream CEO Daniel Birnbaum commented, earlier, that the boycott only had a “marginal” effect on their business and accusing the movement of “antisemitism”, PNN reports.

“Coming just as French multinational Veolia has abandoned the Israeli market following a 7-year campaign against its support for settlements that cost it billions of dollars, SodaStream’s announcement today provides further proof that the BDS movement is increasingly able to hold corporate criminals to account for their role in Israeli apartheid and colonialism.

“SodaStream may wish to try and smear our movement, but it is clear that BDS campaigning and the Scarlett Johansson controversy has persuaded retailers across Europe and North America to drop SodaStream and contributed to SodaStream’s share price to tumble by half in the space of a year.

“Even when this closure goes ahead, SodaStream will remain implicated in the displacement of Palestinians. Its new Lehavim factory is close to Rahat, a planned township in the Naqab (Negev) desert, where Palestinian Bedouins are being forcefully transferred against their will. Sodastream, as a beneficiary of this plan, is complicit with this violation of human rights.

“Israel willfully destroys the Palestinian economy in the West Bank, leading to unemployment and economic crisis. The way to tackle this is the challenge Israel’s system of colonialism and apartheid.

“The BDS movement is opposed to all forms of racism, including anti-semitism and Islamaphobia.”

The BNC is the Palestinian Boycott, Divestment and Sanctions National Committee (BNC), the broad coalition of Palestinian civil society organisations that works to support the boycott, divestment and sanctions (BDS) movement.