Clashes in Jerusalem Upon Death of Riham Dawabsha 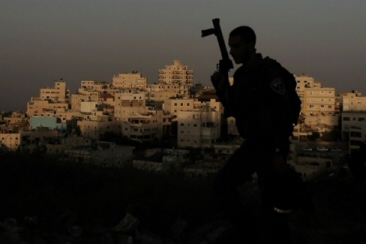 Clashes erupted in occupied East Jerusalem, overnight Monday, following the death of Riham Dawabsha, the mother of an 18-month-old toddler who was burned alive in an arson attack carried out by Israeli settlers in July.The East Jerusalem neighborhoods of Wadi al-Joz, Silwan and al-Tour witnessed clashes, as Palestinians also marked a year since the death of Muhammad Sunuqrut, a teenager who was killed by Israeli police in Wadi al-Joz last year.

Soldiers were said to have fired a stun grenade, while locals responded by throwing stones and fireworks.

The information center added that Israeli forces violently assaulted three Palestinian children on their way home in Silwan. The children were identified as Ahmad Shwiki, 15, Muhammad Kaqour, 14, and Muhammad Awwad, 14.

An Israeli police spokesperson could not be reached for comment.

Riham Dawabsha succumbed to her wounds late Sunday, more than five weeks after she suffered third degree burns across 90 percent of her body during a settler attack on her family home in the northern West Bank.

Her 18-month old son, Ali, was killed in the attack, while her husband, Saad, succumbed to his wounds a little over a week later. She is survived only by her four-year-old son, Ahmad, who remains in hospital.

Hamas led Palestinian factions in a call for action in the wake of her death, calling on military wings to ‘strongly respond to Israel’s reckless attitude toward the Palestinians.’

PLO Secretary-General Saeb Erekat also called for Israel to be ‘stopped and held accountable,’ warning that if it is not, ‘Riham will not be the last victim of Israeli terror.’

Palestinians in occupied East Jerusalem were also marking the death of Muhammad Sunuqrat last year. The Palestinian teen died on Sept. 7, 2014, a week after he was shot by Israeli police in Wadi al-Joz.

His father told Ma’an that his son was walking to the mosque when he was shot, saying it was an unprovoked attack.