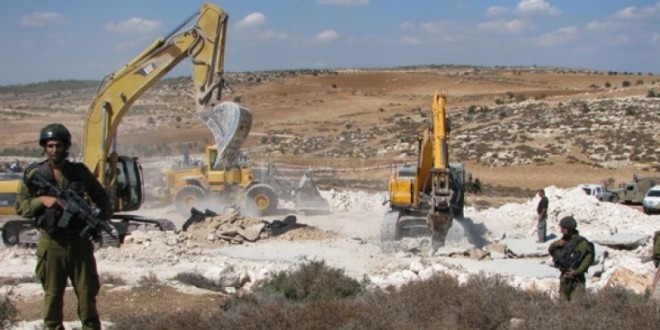 Israeli soldiers, accompanied by armored bulldozers, invaded, on Tuesday morning, Palestinian farmlands in the Rashayda village, east of the West Bank city of Bethlehem, and placed sand barriers blocking an agricultural road.Coordinator of the Popular Committee against the Wall and Settlement Hasan Breijiyya said the road was prepared for use nearly a year ago to enable the residents to enter their Olive orchards and lands, close to the Maaleh ‘Amos illegal colony, built on privately owned Palestinian lands.

Breijiyya called on the villagers to remain alert, and keep their deeds handy, especially since Israel is planning further similar assaults to enable the expansion and development of nearby illegal Israeli colonies.

He added that Israel uses all possible means to gain control over Palestinian lands and property, to build and expand its illegal colonies, in direct violation of International Law, in addition to the illegal annexation of Palestinian lands for what Israel labels as ‘security considerations.’