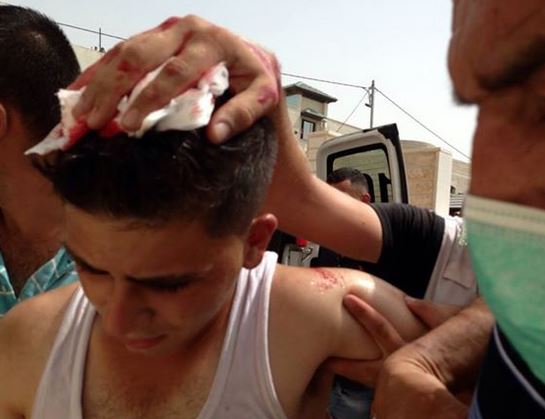 Palestinian medical sources have reported, Friday, that four young men were wounded, one moderately, after Israeli soldiers assaulted the weekly protest in Kufur Qaddoum, near the northern West Bank city of Qalqilia.The protesters marched demanding the army to reopen the main village road that was blocked 13 years ago in order to enable easy access of Israeli colonizers to the Kedumim illegal colony, built on Palestinian lands.

Medical sources said Yousef Eshteiwy, 24 years of age, was shot with a sponge-tipped round in the head, and was moved to the Rafidia Hospital, in Nablus, suffering a moderate injury.

Eshteiwy said the protesters celebrated the UN General Assembly vote in favor of raising the Palestinian flag at the United Nations, and chanted for ongoing resistance against the occupation until liberation and independence.

It is worth mentioning that the soldiers invaded the village, and broke into a number of homes before using their rooftops as firing posts and monitoring towers.

The army also sprayed several homes with wastewater mixed with chemicals, leading to further clashes with local youths, who hurled stones and empty bottles on the invading vehicles.