Legislation to be Set on Minimum Sentences for Throwing Stones 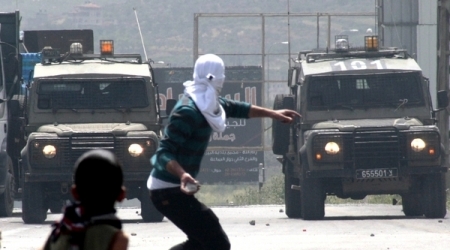 Israeli prime minister Benjamin Netanyahu will head an urgent session, on Tuesday evening, to discuss punishment for stone-throwing.Israeli radio reported, according to Al Ray Palestinian Media Agency, that the session would be to discuss measures in confronting stone-throwing directed at Israeli vehicles in Jerusalem.

It was reported that the announcement comes in the wake of a deadly car crash Israeli police claimed was caused by stone-throwing.

Netanyahu is said to be seeking fast-track legislation for setting a minimum sentence for stone and firebomb throwing. He also will discuss providing administrative detention against the doers.

Palestinians living under Israeli military occupation routinely throw rocks at heavily armed security forces during clashes, as one of the few means available to protest their subjugation.

Youth often throw stones at settler cars driving in the occupied West Bank, while it is also common for settlers themselves — both armed and protected by armed Israeli forces– to target Palestinian vehicles with rocks.

Settler violence against Palestinians in the occupied West Bank is routine and goes unpunished by Israel, with 324 incidents of violence recorded in 2014, according to the UN Office for the Coordination of Humanitarian Affairs.