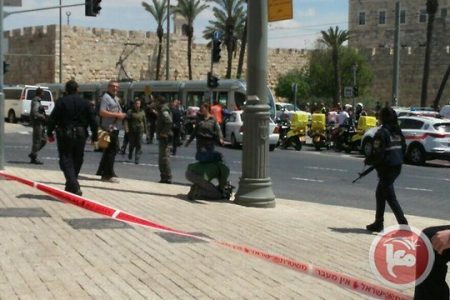 A “mentally unstable” Palestinian man was detained Friday, after committing a stabbing inside the Jerusalem Light Rail, leaving one Britsh woman in her twenties dead, according to official Israeli sources.

Though Israeli media initially reported that an Israeli woman in her twenties was seriously injured, it was later reported that the woman, a British national studying in Israel, succumbed to her wounds at the hospital.

According to Ma’an News Agency, Commander Yoram Halevy, who is in charge of the Israel police’s Jerusalem district, said that the Palestinian man who conducted the stabbing is a “mentally unstable” 57-year-old Jerusalemite, and has a prior criminal police record for domestic violence. Israeli sources later identified the man as Jamil al-Tamimi.

According to Haaretz, al-Tamimi was a resident of the Ras al-Amoud neighborhood of occupied East Jerusalem, located just outside of the Damascus Gate area of the Old City.

Israeli media added that, while one woman in her twenties was injured with a knife, two other Israelis, including a pregnant woman in her thirties and a man in his fifties, were indirectly injured when the train came to a sudden stop in the midst of the attack. The seriously injured woman was reportedly taken to Hadassah hospital, in Jerusalem.

The Jerusalem Post reported that the attack took place while the light rail was on Jaffa Street across from the Old City’s Jaffa Gate.

Locals said that Israeli forces imposed a siege on the entrances of Jerusalem’s Old City following the incident.

An Israeli police spokesperson confirmed the incident in a written statement, saying that Israeli police units were deployed at the scene of the attack “in the center of the town,” adding that the attacker was detained.

The spokesperson confirmed that the woman in her twenties was critically injured and was taken to hospital for treatment, and that “heightened security” was ongoing “in the center of town as well as in and around the Old City.”