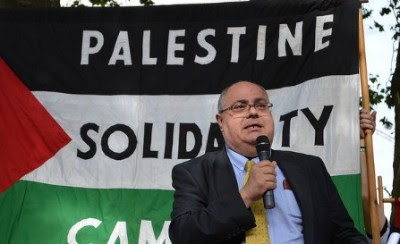 On Friday, Kamel Hawwash, member of Palestine Solidarity Campaign EC and also vice chair of the British Palestine policy council, was denied entry into Israel under the new “anti-boycott” law. This follows the refusal, last month, to allow entry to Hugh Lanning PSC chair, and, last weekend, to Anwar Makhlouf, director of the Palestinian Federation of Chile.

Kamel was on a family holiday with his wife and son, whom he had to leave at the airport. Kamel’s wife has a Jerusalem ID, and he has many relatives in Jerusalem. Kamel has stated, according to the PNN, “I am personally devastated at my denial of entry. Firstly, because I could not be with my wife and son for our holiday, but also because I have been denied entry to my homeland. I have elderly relatives that I will never see again if I am not allowed to enter in the future. I had to leave my wife and son alone in the airport in tears.”

PSC Director, Ben Jamal stated, “The BDS movement peacefully pressures Israel to comply with international law and cease human rights violations. It draws directly from the tactics of Gandhi and Mandela to effect positive change. According to the Israeli government, human rights activism is a security threat. Fundamental democratic norms and freedoms don’t matter. The British government must demand that Israel ceases this harassment.

“PSC is raising Israel’s employment of this pernicious law and its wider harassment of human rights activists with the Government and addressed it in our submission to the Foreign Affairs select committee. We will be seeking to raise the issue further in parliament after the recess.”