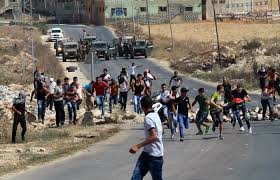 Palestinian medical sources have reported, Saturday, that a Palestinian teen was shot and injured, by Israeli army fire, after several military vehicles invaded Beit Forik town, east of the northern West Bank city of Nablus.The sources said Mohammad Mojahed Hanani, 17 years of age, was shot in one of his legs, and was transferred to a local hospital for treatment.

Eyewitnesses said dozens of local youths clashed with the soldiers, after they invaded their town, and that the army fired dozens of rounds of live ammunition, in addition to rubber-coated steel bullets and gas bombs.

Beit Forik has been witnessing ongoing clashes with the army since Friday, September 18, after a young Palestinian man, identified as Ahmad Ezzat Khatatba, 26, died from his wounds, after being shot three times in the shoulder, chest and abdomen at the Beit Forik roadblock.