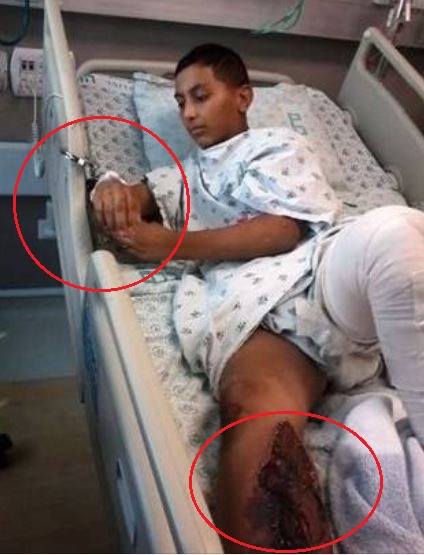 The Palestinian Detainees Committee has reported, Sunday, that detained wounded child, ‘Issa ‘Adnan Adbul-Mo’ty, 13 years of age, currently hospitalized at the Hadassah Israeli medical center in Jerusalem, could lose his leg.Lawyer Tareq Barghouth of the Detainees’ Committee said the child, from Bethlehem, was shot and injured, on September 18, with an Israeli dumdum bullet, near the northern entrance of Bethlehem city.

Barghouth managed to visit the wounded child, to find him cuffed and shackled to his hospital bed despite his serious injuries, in addition to the fact that Israeli soldiers guard his room.

“His health condition is very serious; the doctors might even have to amputate his right leg,” the lawyer said, “Yet, he is shackled to his hospital bed…”

The Lawyer further stated that the Detainees’ Committee is trying to secure the child’s release due to his serious injuries and his very young age. The wounded child underwent a surgery in his leg, but it failed.

“Shooting children, especially with bullets that expand upon impact, is illegal and immoral,” he added, “And yet, the Israeli government has granted the soldiers a green light to even use sniper rifles against Palestinians who throw stones on the military.”

Barghouth described the latest Israeli government decision to use lethal force against the Palestinians as a license to premeditated murder and execution.