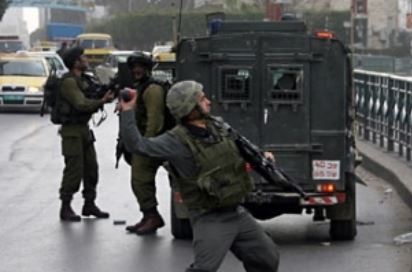 Seven Palestinian have been shot and injured by Israeli army fire, Sunday, after dozens of soldiers invaded ‘Orif village, south of the northern West Bank city of Nablus.Medical sources said resident ‘Amer Falah Safadi was shot with a live round in his arm, and Ahmad Yousef Safadi, with a live round in the leg.

Many Palestinians suffered the effects of tear gas inhalation, and received treatment by local medics.

Israeli soldiers invaded, Sunday, the village of Orif, south of the northern West Bank city of Nablus, and clashed with dozens of local youths, wounding five Palestinians with live ammunition.

The invasion and clashes took place after Israeli extremists infiltrated into Palestinian farmlands, and set them ablaze.

The locals rushed to extinguish the fires, and the soldiers invaded the village shortly afterwards.

Also on Sunday, undercover soldiers of the Israeli army invaded the Specialized Arab Hospital in Nablus, and kidnapped a patient.