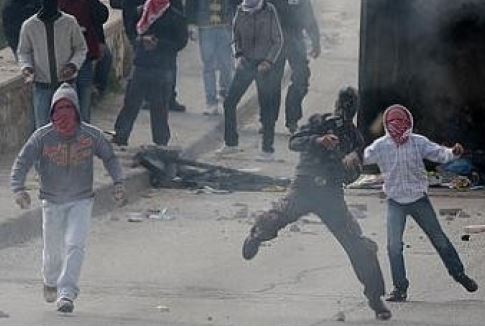 Palestinian medical sources have reported that ten residents were injured, Sunday, by Israeli rubber-coated steel bullets, and dozens suffered the effects of tear gas inhalation, during clashes that took place after the army invaded the al-‘Isawiyya town, northeast of occupied Jerusalem.The soldiers invaded the town from various directions and clashed with local youths, who hurled stones and empty bottles on them.

Medics said ten youngsters were shot with rubber-coated steels bullets, and received the needed treatment, while dozens of residents were treated for the effects of tear gas inhalation.

In addition, soldiers completely surrounded the town, and various Palestinian neighborhoods in Jerusalem, and prevented the Palestinian worshipers from entering the Al-Aqsa Mosque, after the fatal shooting of Fadi Alloun, 19, who was shot dead by army fire allegedly after he stabbed a settler in Jerusalem.

His father, Samir, who was detained and interrogated by the army in the al-Maskobiyya facility, said the soldiers were asking him about his son, and the rest of the family.

The Ad-Dameer Prisoners’ Support and Human Rights Association said, so far, Israel is still refusing to transfer the bodies of Alloun, and Mohannad al-Halabi, to their families.

Al-Halabi was shot to death by Israeli police after allegedly stabbing to death an armed Israeli, grabbing the gun of a settler who intervened, then killing an additional person and wounding two others in the Old City of Jerusalem.