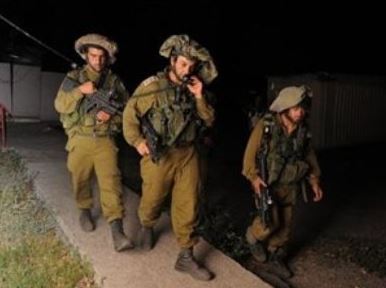 Israeli soldiers invaded, on Tuesday at dawn, several Palestinian communities in the occupied West Bank, broke into and searched dozens of homes, and kidnapped at least eleven Palestinians.Several armored military vehicles invaded Barta’a village, in the northern West Bank district of Jenin, and clashed with dozens of local youths before kidnapping two teenagers near the villages’ main entrance.

In addition, soldiers invaded Huwwara town, south of Nablus, and searched several homes, including the home of Shaher Dmeidi in an attempt to kidnap his son, Ahmad, but he managed to escape, and the soldiers kidnapped his father instead.

Clashes took place in the Old City of Nablus, and the Balata refugee camp, after the soldiers invaded them, while one child was shot with a rubber-coated steel bullet, and many residents suffered the effects of tear gas inhalation.