Teen Shot In The Chest, Many Injured In Ramallah And Jenin 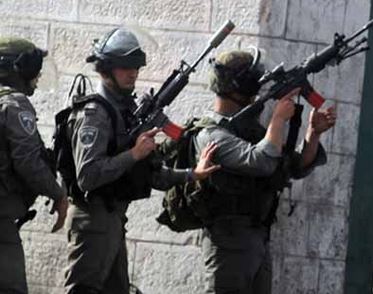 Medical sources have reported, Tuesday, that a Palestinian teen was shot with a live round to the chest, in the central West Bank city of Ramallah, while at least ten others were injured in the northern West Bank district of Qalqilia.Eyewitnesses said Israeli soldiers fired live rounds at Palestinian protesters near the Bet El illegal settlement, built on Palestinian lands north of Ramallah and al-Biereh, serious wounding an 18-year-old boy in the chest. His condition has been described as serious but stable.

Medical sources in Ramallah said many residents suffered the effect of tear gas inhalation, and several others were shot with rubber-coated steel bullets.

The sources added that, on Monday, eight Palestinians were shot with live Israeli army fire, 14 with rubber-coated steel bullets, and at least 10 suffered the effects of tear gas inhalation.

In related news, more than ten Palestinians, including a child, suffered the effects of tear gas inhalation, during clashes with Israeli soldiers invading al-Fondoq and Hijja villages, in the northern West Bank district of Qalqilia.

The injuries took place after a group of Israeli extremists invaded the al-Fondoq village, before dozens of residents from the village, and from the nearby Hijja village, intercepted them, and foiled their invasion.

Israeli soldiers then invaded the village, clashed with the Palestinians, and secured the escape of the assailants.