Soldiers Kidnap A Deaf And Mute Child In Hebron 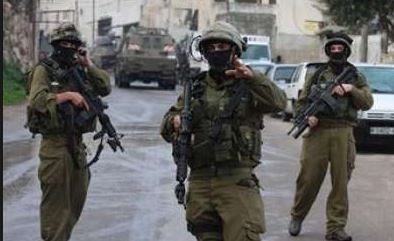 Israeli soldiers kidnapped, Tuesday, a deaf and mute Palestinian child in the southern West Bank city of Hebron, and kidnapped two Palestinians in Beit Ummar nearby town. The army also installed roadblocks on roads leading to several towns in the district.The Palestinian News & Info Agency (WAFA) has reported that the soldiers assaulted a deaf and mute child, identified as Hasan Daoud Rajabi, 14 years of age, after storming his family’s home, and kidnapped him.

The soldiers violently searched the property, causing damage, and anxiety attacks among family members, before kidnapping the child.

Coordinator of the Popular Committee against the Wall and Settlements in Beit Ummar, Mohammad Ayyad Awad, said the soldiers invaded, on Tuesday at dawn, ‘Aseeda area in the town, and stormed the home of Khaled Suleiman al-‘Awwadi, and kidnapped his son, Mohannad, 26 years of age, before taking him to their base in the Karmie Tzur illegal colony, north of Hebron.

In addition, soldiers installed several roadblocks on Hebron’s northern roads, and the main entrance of Sa’ir town north of Hebron, before stopping and searching dozens of cars, and examined the ID cards of the passengers.

On Monday evening, at least four Palestinians were shot by live Israeli army fire, and two by rubber-coated metal bullets, during clashes with Israeli soldiers near Beit El illegal settlement, built on Palestinian lands belonging to residents of al-Biereh, and the villages of Beiteen and Doura al-Qare’.

The soldiers also fired gas bombs and concussion grenades, causing many Palestinians to suffer the effects of tear gas inhalation.

Teen Shot In The Chest, Many Injured In Ramallah And Jenin