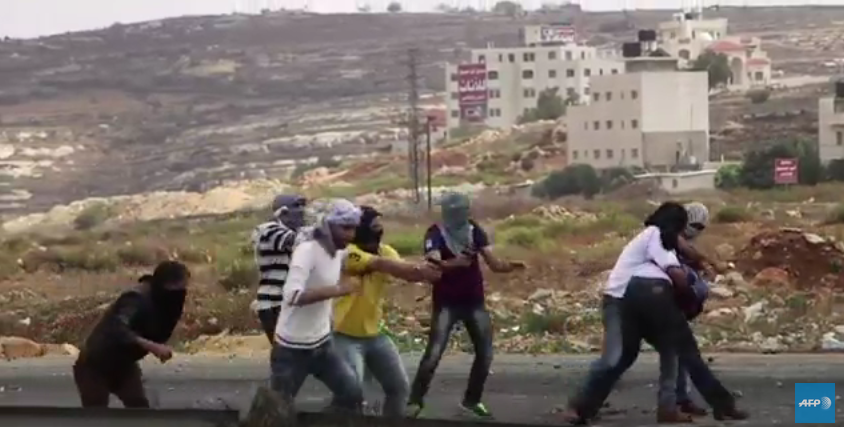 A Reuters camera operator captured on film a group of Israeli undercover agents dressed as Palestinian youth during a demonstration in Beit El on Tuesday. The soldiers are seen throwing stones alongside demonstrators, then turning around, drawing their guns and shouting orders at the crowd.The video, copyrighted by AFP, can be viewed here. Around 20 seconds into the video, the Israeli infiltrators turn on the rest of the demonstrators and threaten to shoot them.

Another incident on Wednesday afternoon was described on the website ‘Mondoweiss.net’ as follows: ‘Videos of the incident …reveal eight Israeli security forces dressed as protesters with their faces covered, and one with a Hamas flag. After participating in the protest confronting uniformed soldiers and throwing stones, the undercover forces suddenly drew their weapons against the Palestinian demonstrators. The Israeli forces began backing up towards the Beit El checkpoint and a cluster of army Jeeps. Palestinians sprinted in the opposite direction.

‘Next a group of five undercovers are filmed detaining a Palestinian by throwing the youth to the ground, and punching and kicking him. While in custody one of the officers shoots the Palestinian in the leg. He is then dragged away, bleeding from his face, and soldiers detained him for questioning. Later the youth was transferred to an Israeli medical facility.’

See more on this incident at the Mondoweiss website

The website Electronic Initifada documented other incidents in which soldiers dressed as Palestinians are seen in the crowd, then photographed again among the Israeli soldiers, working with them and drawing guns against the Palestinian demonstrators.

On Sunday, undercover Israeli agents dressed as Palestinian civilians were able to enter a Palestinian hospital in Nablus and snatch a wounded boy from his hospital bed, allegedly because he was ‘wanted’ by Israeli forces for resisting the military occupation in some way.

These tactics are being utilized in the context of escalating protests across the West Bank, Jerusalem and inside Israel itself, which some analysts are terming a ‘third intifada (uprising)’ by Palestinian youth who have taken to the streets in large numbers to oppose the ongoing Israeli occupation of Palestinian land and denial of basic human rights for the Palestinian people.

The tactic of infiltrating Palestinian protests with undercover soldiers dates back to the first intifada in the late 1980s, when the undercover forces regularly entered Palestinian towns and villages dressed as Palestinians in order to carry out extrajudicial assassinations against Palestinians suspected of organizing demonstrations against the military occupation of their land.