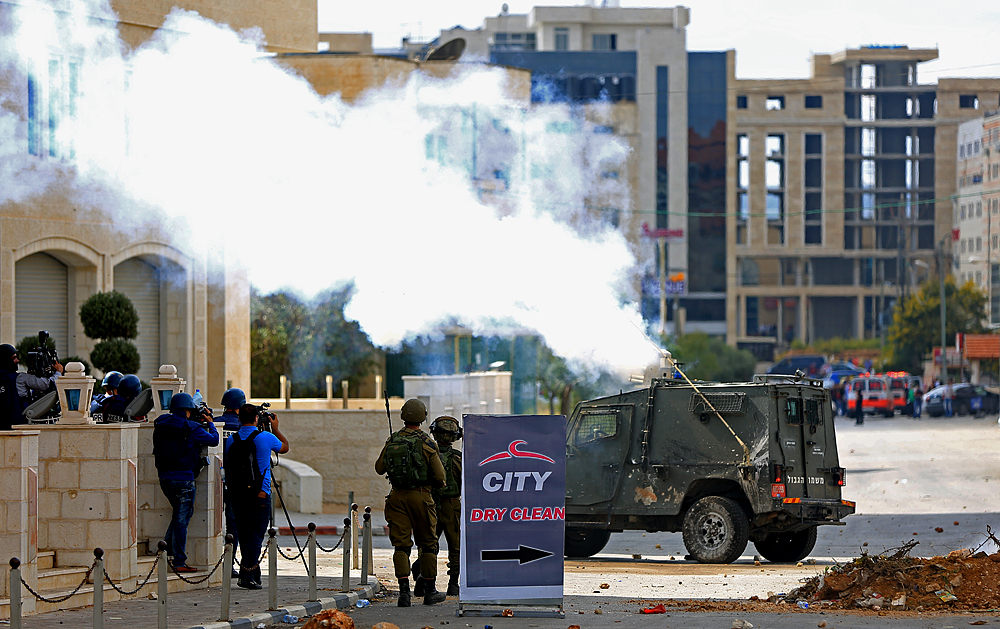 The Palestinian Red Crescent Society (RCS) announced that at least 94 Palestinians have been injured during the ongoing clashes all over the West Bank since Thursday morning. According to the RCS, five of those injured were hit by live gunfire fired by Israeli troops at protesters. The RCS said that on Wednesday 298 Palestinians were injured by Israeli troops’ gunfire during West Bank clashes. At least nine were hit by live gunfire, 89 by rubber-coated steel bullets and at least 189 were treated for the effects of tear gas inhalation.

Local Palestinian sources reported clashes near the Settlement and military checkpoint of Beit Eil in Ramallah city, central West Bank. the RCS said that ambulances have moved at least a dozen injured youth to local hospitals.

In Bethlehem, southern West Bank, Israeli forces attacked protesters near the 300 military checkpoint and the wall that separates the city from the nearby Jerusalem.

Local sources said that soldiers fired tear gas and live gunfire at protesters. One youth was injured and moved to hospital.

At the village of Taq’ua near Bethlehem, Israeli troops attacked protesting Palestinian school children with tear gas and rubber-coated steel bullets. Medical sources said that many children were treated for the effects of tear gas inhalation.

In Jericho, many youth were treated for the effects of tear gas inhalation after Israeli troops attacked protesters at the main entrance of the city. Palestinian media sources said that the clashes are still ongoing.

Elsewhere, Israeli troops invade the northern West Bank city of Nablus and the nearby Tall village.

According to Palestinian sources Israeli soldiers ransacked homes in Tall village and too money from residents homes. Later local youth clashes with the invading forces. Many residents were treated for the effects of tear gas inhalation during the clashes.