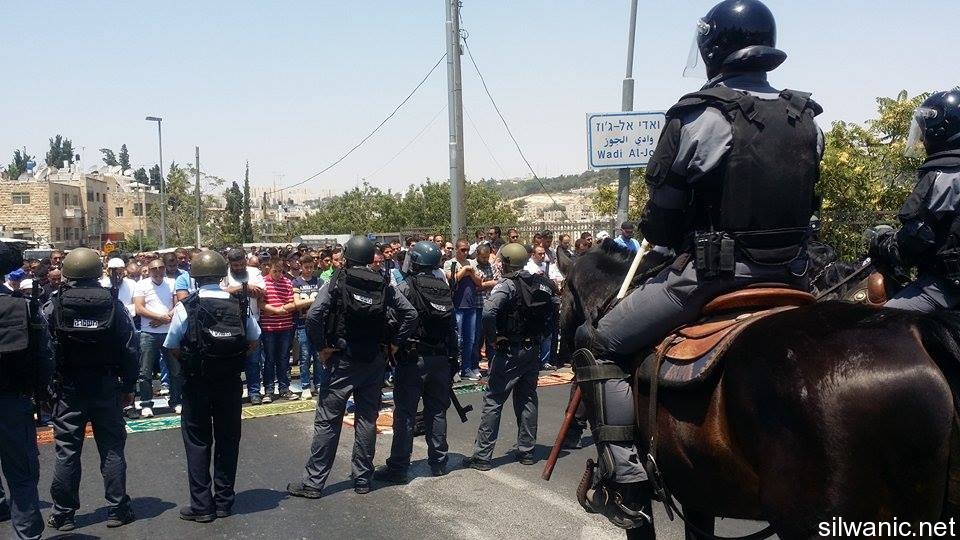 Israeli soldiers invaded the al-‘Isawiyya town, the at-Tour village and the Shu’fat refugee camp, in occupied Jerusalem, and clashed with local youths wounding fourteen Palestinians. The army also kidnapped four Palestinians, including an 11 years of age child.The soldiers invaded Shu’fat refugee camp and Ras Khamis nearby area, and clashed with dozens of local youths, causing many to suffer the effects of tear gas inhalation, while five Palestinians were shot with rubber-coated steel bullets.

In related news, the soldiers shot and injured a young Palestinian man, with a live round, allegedly after attempting to throw a Molotov cocktail on their vehicle.

The soldiers also clashed with scores of Palestinian youths in the at-Tour town, and kidnapped two children before moving them to an unknown destination.

In Wadi al-Jouz neighborhood, soldiers stormed and searched several homes, occupied their rooftops, and kidnapped five teenagers. Two of them have been identified as Nasser Jamal Siyam, 19, and Rakan Nabil Siyam, 17.

The soldiers and kidnapped a Palestinian, identified as Aseed Sa’id Gheith, in Bab al-‘Amoud area, after repeatedly beating him, and kidnapped Naseem Rabea’ Ghazali, only 11 years of age, and Mohammad Hamdan al-Mohtasib, 16, in the village of at-Tour.

In related news, the Wadi Hilweh Information Center in Silwan (Silwanic) has reported that the soldiers shot and injured eight young Palestinians with live rounds in al-‘Isawiyya and Ras al-Amoud, and that one of them suffered a head injury.

It added that dozens of residents suffered the effects of tear gas inhalation during clashes that took place after the soldiers invaded Shu’fat refugee camp and Jabal al-Mokabber. The army also kidnapped one of the wounded Palestinians in Shu’fat.