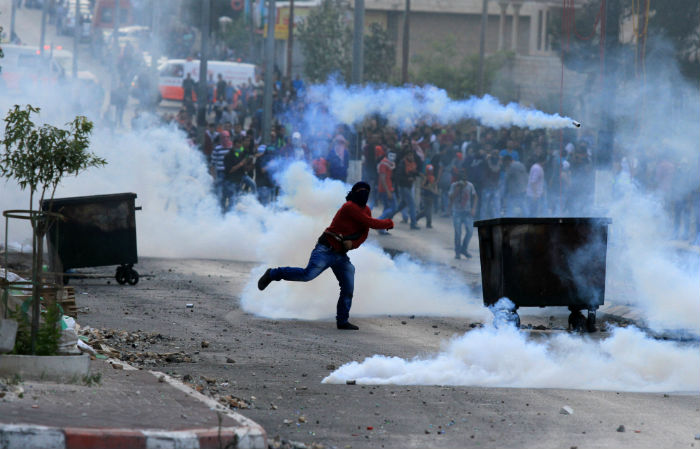 More than a dozen civilians were injured by Israeli army live gunfire and rubber-coated steel bullets, and scores others were treated for the effects of tear gas inhalation during ongoing clashes in different parts of the west Bank on Saturday. In the central West Bank city of Ramallah, Israeli soldiers attacked a students’ protest near the Beit Eil military base and settlement at the northern entrance of the city.

Palestinian medical sources said that the youth who was critically injured near Beit Eil was hit with an explosive live round in his abdomen.

Elsewhere, Israeli troops attacked villagers of Yatta village in southern West Bank as they marched in the funeral of Amjad Al Jinidi, 17. He was killed by Israeli troops on Wednesday agedly after he tried to stab soldiers near the illegal settlement of Kriat Gat near Yatta.

Seven youth were injured, one child was kidnapped by troops as Israeli forces stormed the village and attacked residents homes and protesting youth.

While covering the Israeli invasion of Yatta, Israeli forces attacked journalists from Palestine Today satellite channel and other journalists present in the area.

Also in southern West Bank, Palestinian youth clashes with Israeli troops at the northern entrance of Bethlehem city, up until the time of this report no injuries were reported.

In Sho’fat refugee camp in Jerusalem residents clashes with Israeli troops when they attacked the funeral of Ahmad Salah, 24, who was killed by an Israeli sniper on Saturday at dawn.

The Palestinian Red Crescent Society announced on Friday that 1640 Palestinians have been injured all over the West Bank since the start of October until Thursday midnight.