Another Youth Shot Dead in Jerusalem; Death Toll Stand at Four on Saturday 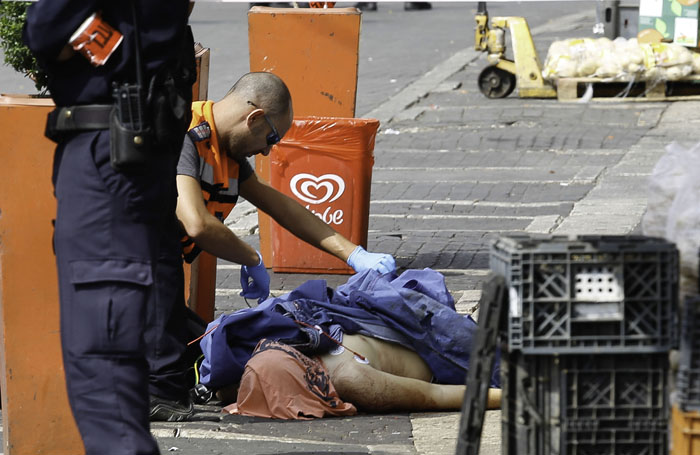 A Palestinian youth was shoot dead by Israeli soldiers at Damascus Gate just outside Jerusalem’s old city of Saturday afternoon, Palestinian sources reported. According to witnesses the youth was chased by Israeli troops and gunned down then was left to bleed on the ground. Up until the time of this report, the name or the circumstances of his death remains unclear.

The attack took place just few meters away from another incident were Israeli police shoot and killed and Palestinian youth on Saturday morning.

16-year-old Ishaq Badran from the town of Kufer Aqeb near Jerusalem, was shoot dead at a falafel restaurant where he works n the al-Misrara area, near Damascus Gate in occupied east Jerusalem.

Earlier on Saturday morning, medical sources reported that two Palestinians died of severe gunshot injuries they suffered at the hands of Israeli soldiers in separate incidents, one in Sho’fat refugee camp in occupied Jerusalem, and one in Deir al-Balah, in Central Gaza.

The Palestinian Ministry of Health said that 11 Palestinian were killed since Friday morning so far. The ministry add in a press statement that 220 Palestinians were also injured by Israeli live gunfire and rubber coated steel bullets in the past 24 hours.

Moreover, since the start of October Israeli attacks have left 18 Palestinians killed and at least 1000 others injured by soldiers’ live gunfire and rubber coated steel bullets, the Ministry of Health added.