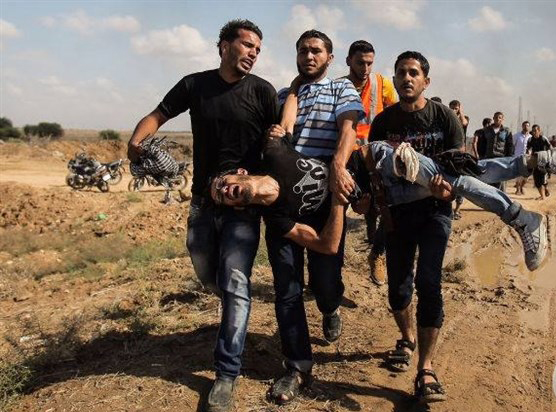 10 Palestinian Civilians Killed and 187 Civilians Wounded, Including 27 Children, Physician and Turkish Journalist, by Israeli Forces in the oPt; Seven of the Victims Were Killed in the Gaza Strip in Few Hours.Using excessive force, on Friday, 9 October 2015, Israeli forces killed seven Palestinian civilians, and wounded 67 civilians, including 17 children and a Turkish photojournalist, in five locations near the border between the Gaza Strip and Israel.

Field investigations indicate that Israeli forces used excessive lethal force in the Gaza Strip in violation of the principles of proportionality and military necessity.

Many of the Palestinian victims were shot in the upper parts of their bodies, reflecting an Israeli intention to cause maximum casualties among Palestinian civilians, who did not pose any serious threat to the lives of Israeli soldiers stationed in fortified military sites far away from the demonstrators.

According to investigations conducted by the Palestinian Center for Human Rights (PCHR), at approximately 13:15 on Friday, 9 October 2015, dozens of young men and children headed to the border between the Gaza Strip and Israel, particularly the vicinity of Nahal Ouz military post, to the east of al-Shujaiya neighborhood in the east of Gaza City, to express solidarity with the popular uprising in the West Bank, including East Jerusalem.

Once they approached the border and threw stones at Israeli forces stationed behind it, Israeli forces opened fire at them. As a result, 4 Palestinian civilians were killed and 31 others, including 11 children, were wounded.

A Turkish journalist, Metin Yuksel Kaya, an Anadolu Agency photojournalist, was also injured as a bullet hit his camera and its shrapnel hit his fingers. The civilians who were killed were identified as:

1. Shadi Hussamuddin Dawla, 24, from al-Zayotoun neighborhood in Gaza City, hit by a bullet to the abdomen;

2. Ahmed Yahia al-Herbawi, 20, from al-Nussairat refugee camp in the central Gaza Strip, hit by a bullet to the chest;

3. Abdul Majid Majdi al-Wehaidi, 18, from Jabalya, hit by a bullet to the neck;

4. Ziad Nabil Ziad Sharaf, 18, from al-Tuffah neighborhood in Gaza City, hit by a bullet that entered the chest and existed the back.

At approximately 14:45, dozens of young men and children gathered in the east of al-Farrahin area in Abassan village and Khuza’a village, east of Khan Yunis. They headed towards the border between the Gaza Strip and Israel raising Palestinian flags.

Once they approached the border and threw stones at Israeli forces stationed there, Israeli soldiers opened fire at them.

Israeli soldiers continued to fire at the Palestinian demonstrators sporadically until the evening. As a result of the Israeli gunfire, two Palestinian civilians, were killed and 11 others were wounded, including a young man who was seriously wounded and was pronounced dead on Saturday morning.

The Palestinian civilians who were killed were identified as:

1. Mohammed Hisham Mohsen (al-Reqeb), 18, from Bani Suhaila village east of Khan Yunis, hit by a bullet to the chest;

2. Adnan Mousa Abu Olayan, 23, from Bani Suhaila village east of Khan Yunis, hit by a bullet to the head;

Five of the wounded are in critical conditions. Additionally, dozens of civilians suffered tear gas inhalation as Israeli forces fired dozens of tear gas canisters at them.

In the West Bank, on Saturday morning, 10 October 2015, Israeli soldiers positioned at Shufat checkpoint, north of East Jerusalem, shot dead Ahmed Jamal Salah, 22, with a bullet to the head from a close range, during clashes near the checkpoint. Another two civilians were also wounded.

When Salah was wounded, Israeli forces left him bleeding on the ground for a long time. They then transported him to Hadassa Hospital in Israel where he was later pronounced dead.

At approximately 11:30 on Friday, 9 October 2015, Israeli forces positioned along the road linking between the Ibrahimi Mosque and ‘Kiryat Arba’ settlement, east of Hebron, shot dead Mohammed Fares Abdullah al-Ja’bari, 19, from Khillat Haddour area in the southeast of Hebron, with several bullets, when he was near the road leading to ‘Givat Havot’ settlement outpost. Al-Ja’bari was transported by an Israeli ambulance to ‘Kharsina’ settlement.

His body was delivered to Palestine Red Crescent Society at approximately 21:00 on the same day. Israeli forces claimed that al-Ja’bari stabled an Israeli soldier and attempted to seize his gun before other soldiers shot him.

As a result, 15 Palestinian civilians, including two children and a physician, were wounded. The physician, Omar Aaqel, 25, was wounded by a rubber-coated metal bullet to the eye, due to which he lost his eye.

Earlier, on Thursday evening, 8 October 2015, Israeli forces shot dead Wissam Jamal Faraj al-Mansi, 20, with a dum dum bullet to the head, and wounded 33 others – 6 ones with live ammunition and the others with rubber-coated metal bullets – in Shu’fat refugee camp, north of Jerusalem.

Israeli forces that had moved into the camp opened fire at a number of young men who threw stones and Molotov cocktails at Israeli military vehicles.

PCHR strongly condemns the use of excessive force by Israeli forces against the Palestinian civilians in disregard for the their lives.

PCHR calls upon the international community to take immediate and effective actions to put an end to such crimes and reiterates its call for the High Contracting Parties to the Fourth Geneva Convention of 1949 to fulfill their obligations under Article 1; i.e., to respect and to ensure respect for the Convention in all circumstances, and their obligation under Article 146 to prosecute persons alleged to commit grave breaches of the Fourth Geneva Convention.

These grave breaches constitute war crimes under Article 147 of the same Convention and Protocol I Additional to the Geneva Conventions.