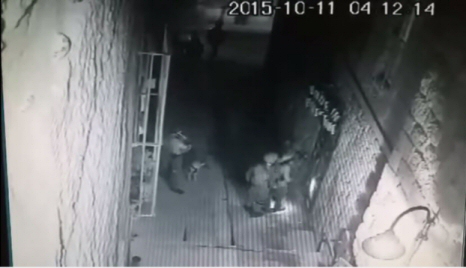 Sunday morning at dawn, Israeli soldiers raided the office of the International Middle East Media Center (IMEMC) and the Palestinian Center for Rapprochement (PCR). IMEMC is playing a pivotal role in conveying Palestinian news to an English-reading readership. At dawn on Sunday October 11, the office of the independent news agency and nsnbc partner IMEMC was raided by Israeli soldiers. The raid took place within the context of an escalating spiral of violence caused by the Israeli occupation of Palestine and a growing popular resistance that according to some analysts has the potential to escalate into a full-scale Palestinian uprising.

The International Middle East Media Center reports that Israeli soldiers searched and ransacked its offices after breaking the main door. The assault was captured by a security camera (see video below). No staff was present during the raid at 4.00 o’clock in the morning. Soldiers also invaded and ransacked nearby homes. The offices of IMEMC and of the PCR have repeatedly been ransacked by Israeli police and military in the past.

nsnbc international contacted and interviewed IMEMC Editor-in-Chief Saed Bannoura to hear his opinion about the raid at dawn and the current escalation of the Israeli – Palestinian conflict.

nsnbc: IMEMC is conveying much news coverage about Palestine to a worldwide English-reading readership. Much of this coverage would otherwise only be available in Arab language. Would you perceive the raid as part of an Israeli strategy to intimidate independent journalists within the context of the current uprising against the occupation and the escalating violence?

Saed Bannoura: Yes. As you know, IMEMC has also been subject to frequent cyber-attacks and attempts to put our website offline. Just last week we were subject to another cyber attack. Therefore, I would extrapolate that the raid is part of an attempt to silence us. Last week’s attack was the strongest cyber-attack we had experienced so far. It came after several smaller attacks.

nsnbc: I recall that your site was subject to a cyber (DoS / DDoS) attacks during the 2014 war on Gaza, resulting in your website being offline for a few days. On a positive note, there are indicators such as the fact that the readership went up with several hundred percent while mainstream media were bleeding viewers, listeners and readers to media like IMEMC, nsnbc international and others. Cyber attacks against IMEMC, nsnbc and others usually happen within such contexts. What would you perceive as one of the main problems with regard to cyber-security?

Saed Bannoura: It is in part an economic problem. Depending on donations from readers we lack the money for a much-needed re-design of our website, and moreover, the money to find a reliable web-host.

nsnbc: Concurrently with last week’s cyber-attack IMEMC reported about the infiltration of Palestinian protesters by Israeli agent provocateurs and death squads. This included video coverage of a willful fatal shooting of a Palestinian by Israeli officers (see video below). If you would allow me a personal question please. – You have yourself experienced extreme violence, have been shot several times by a death squad and have become paralyzed as a result of this attack. What is your personal response to the recent aggravation of violence and how do you perceive this development from the perspective as Editor-in-Chief of the International Middle East Media Center?

Saed Bannoura: Well, the use of death squads is nothing new. Their mission is to kill more than it is to arrest. I have had my own experience some years ago but the death squads never actually stopped. What happens is that they recently have escalated their operations.

I personally, and from experience believe Israel is very devastated and cannot stop the Palestinian uprising. It will resort to whatever means it has available. What does not kill us makes us stronger, and what does actually kill us creates generations of new revolutionaries.Israel is desperate and I would not be surprised if they resumed extra-judicial assassinations.

nsnbc: Thank you Sir, for the interview. We know the problem about financing independent media all too well and hope that you will receive support in that regard. We also hope that the latest Sunday-morning raid will not affect your reporting and daily news coverage.