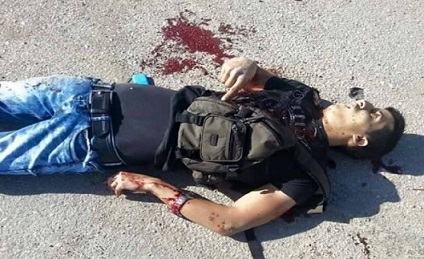 Israeli sources have reported that a Jewish man was shot and killed in Jerusalem, late Wednesday night, by Israeli soldiers who mistook his nationality, believing he was “a Palestinian attacker.” Soldiers also shot a Palestinian dead in Jerusalem; the army claimed he stabbed a soldier. Israeli Ynet News said the man was only identified through his ID card, and that the soldiers claimed he attacked them, and attempted to grab one of their weapons.

It added that the soldiers “mistook the Jewish man for a nationalistically motivated attacker,” a term used to describe attacks carried out by Palestinians.

The news agency also said that a female combat soldier was stabbed in the neck, suffering a critically injury, earlier Wednesday, near Benyamin settlement close to Jerusalem, and that another female soldier shot the Palestinian attacker dead. Another Palestinian was arrested, and was later cleared and released.

The slain Palestinian man has been identified as Mo’taz Atallah Qassem, 22, years of age, from the al-‘Ezariyya town, east of occupied Jerusalem.

In related news, soldiers injured a young Palestinian identified as Hussein Sufian Tarayra, after ramming him with their jeep, during clashes in Bani Neim town, east of Hebron, during clashes that erupted after the soldiers invaded the town.

On Wednesday at night, soldiers shot and killed a young Palestinian man, at the main entrance of Beit Ummar town, north of the southern West Bank city of Hebron.

On Wednesday evening, medical sources at the Hebron Governmental Hospital, in the West bank city of Hebron, have reported on Wednesday evening that an elderly man died of severe effects of tear gas inhalation, after dozens of soldiers invaded the Zawiya area in the city.

On Tuesday at night, soldiers shot and killed two children, aged 15 and 17 years old, in Hebron’s Old City, allegedly –after they ‘tried to attack a soldier’. The military claimed that one soldier was lightly wounded.