Surgeons at the Hadassah Israeli Medical Center, in Jerusalem, had to remove the left eye of a Palestinian man, who was shot with an Israeli army rubber-coated steel bullet, in his house’s balcony, in the al-‘Isawiyya town, in occupied Jerusalem.The Wadi Hilweh Information Center in Silwan (Silwanic) said the wounded Palestinian has been identified as Luay Faisal Ali Obeid, 37 years of age. He is a father of five children between the ages of four and 17.

Obeid told Silwanic while receiving treatment in Hadassah that he was shot last Wednesday, October 21, and that one of the soldiers deployed in the area pointed his gun at him, as he stood in his third floor balcony, and fired his gun, without any justification as no clashes were taking place at the time of the shooting.

In addition to losing his left eye, Obeid, who works as a bus driver with a tourism company, also suffered fractures in his skull and nose.

On Saturday at dawn, soldiers invaded the Jenin refugee camp, in the northern West Bank district of Jenin, and kidnapped two Palestinians.

Late on Friday at night and on Saturday at dawn, soldiers kidnapped eleven Palestinians, including two children, in different parts of occupied Jerusalem. 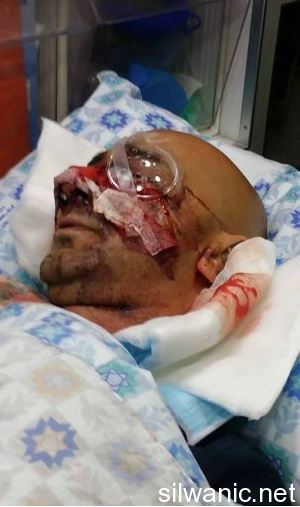