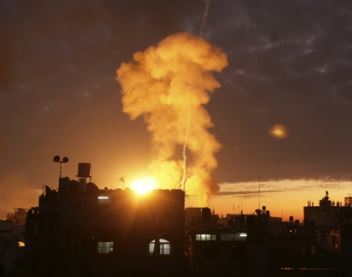 The Israeli Air Force carried out, on Monday at night, two air strikes targeting targets in the Gaza Strip, wounding one civilian, and causing excessive property damage. Another Palestinian was injured by army fire in Central Gaza.The first Israeli air strikes struck east of the al-Maghazi refuge camp, in central, wounding one resident, who was moved to the Al-Aqsa Hospital, in Deir al-Balah nearby town.

The strike caused excessive damage to a number of homes and property.

The Israeli Air Force also struck a site, close to the destroyed and repeatedly bombarded Gaza International Airport, east of Rafah, in the southern part of the Gaza Strip. The strike caused excessive property damage, but no injuries.

In addition, soldiers stationed across the border fence, opened fire on Palestinian protesters, east of the al-Boreij refugee camp, in central Gaza, moderately wounding one Palestinian with a live round.

Meanwhile, Israeli media sources said a shell was fired from the Shuhada Graveyard, south of Beit Hanoun, in the northern part of the Gaza Strip, and struck an open area in the Shaar HaNegev Regional Council of settlement, causing no damage or injuries.