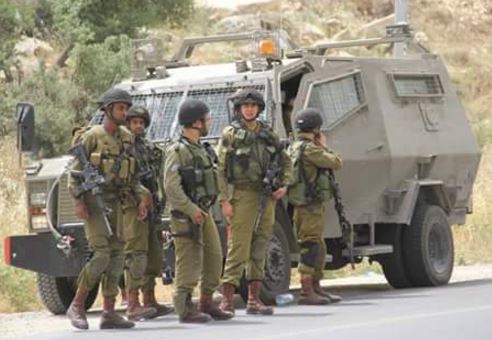 Israeli soldiers have kidnapped, on Sunday at dawn, twelve Palestinians during invasions and searches of homes, in the southern West Bank city of Hebron, several nearby villages, towns and the al-‘Arroub refugee camp.The soldiers invaded various neighborhoods in Hebron city, in addition to the towns of Surif, Yatta, Beit ‘Awwa, Beit Kahel and the al-Fawwar refugee camp, stormed and violently searched dozens of homes and kidnapped twelve Palestinians.

The soldiers forced the families out of their homes, and interrogated many Palestinians before kidnapping twelve.

On Saturday at night, the soldiers kidnapped six Palestinians, including a father and his son, in Hebron, and the nearby towns of Yatta and Halhoul, while seven Palestinians were injured in ensuing clashes.

Also on Saturday at night, the army invaded the northern West Bank city of Qalqilia, and clashed with local youths, wounding ten Palestinians with rubber-coated steel bullets, while at least 25 others suffered the effects of tear gas inhalation; the soldiers also kidnapped one of the wounded residents.