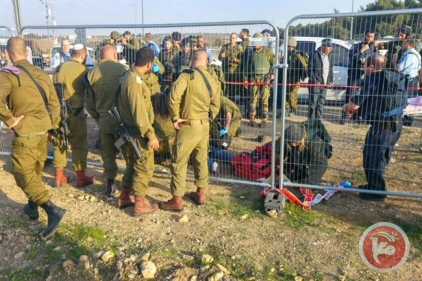 A Palestinian man was shot and killed by Israeli forces after he stabbed to death a 21-year-old Israeli woman near the illegal Israeli settlement bloc of Gush Etzion Sunday night, Israeli sources said.An Israeli army spokesperson told Ma’an News Agency that, after the Palestinian stabbed the woman at the Gush Etzion junction, ‘forces on site responded to the imminent threat and shot the attacker, resulting in his death.’

The Israeli victim, identified as 21-year-old Hadar Buchrus, was evacuated to Shaare Zedek hospital in Jerusalem where she was pronounced dead. A spokesperson for the hospital said: ‘She was brought to the hospital almost dead.’

A Ma’an reporter who was in the area during the attack said that he witnessed dozens of Israeli soldiers rushing to the hitchhiking station for Israeli settlers at the Gush Etzion junction, firing gunshots.

The soldiers then shut down the main bypass road known as Route 60.

Thawabta was the third Palestinian to be killed on Sunday, after another two Palestinians were shot dead by Israeli settlers in two separate incidents on Sunday morning.

A Palestinian taxi driver was shot and killed by a settler near the illegal Israeli settlement of Kfar Adumim in the central West Bank after he ran into another car on a main road, and allegedly got out ‘with a knife in his hand,’ Israeli police said.

Less than an hour earlier, a prominent Israeli settler ran over a 16-year-old Palestinian girl near Nablus, saying that he believed she intended to carry out a stabbing attack at Huwarra checkpoint. After she was hit by the car, another Israeli settler then shot her multiple times while she was lying on the ground.

The teenager was identified as Ashraqat Taha Ahmad Qatanani from Nablus, while Israeli media identified the man who ran her over as Gershon Mesika, the former head of the ‘Samaria regional council,’ which represents Israel’s illegal settlements in the northern West Bank.

After running the girl over with his car and driving into a ditch, Mesika reportedly got out of his car and shot the girl. Israeli forces also opened fire on her.

The Gush Etzion junction in particular has been the site of several deadly encounters, including a shooting attack on Thursday that resulted in the death of two Israelis and one Palestinian bystander, and the injury of 10 others.

In response, Israeli officials agreed on Thursday to increase security measures inside the settlement bloc, including increased restrictions on the movement of Palestinians.

Israeli news site Ynet reported that the measures could include the temporary restriction of movement of Palestinians in the area, the deployment of extra Israeli security forces, and the construction of a ‘fence’ along certain roads.

The measures come after a meeting between the Israeli Minister of Defense Moshe Yaalon, the Israeli army’s chief of staff, and the mayor of the Gush Etzion Regional Council, an administrative body for illegal settlements in the area.

The regional council also urged settlers who own firearms to voluntarily accompany children on school buses to assist as first responders after attacks.