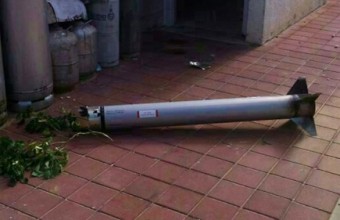 A rocket fired from the Gaza Strip reportedly landed in southern Israel on Monday, with no injuries reported, according to Israel’s army.A spokesperson said that the rocket was launched at 6:30 a.m. and landed in an open area of the Eshkol regional council.

Israeli forces are currently searching the area. No political group in Gaza has claimed responsibility.
Last Wednesday, Israeli forces launched airstrikes on the Gaza Strip after a rocket fired from the besieged strip exploded near the border fence.

Although much of the rocket fire has been claimed by small militant groups operating in Gaza, the Israeli army has consistently held the territory’s de facto leaders Hamas responsible. Hamas has not claimed responsibility for any rocket attacks since last year’s devastating war, and the movement has been attempting to clamp down on many of the smaller armed groups operating in the territory.

Sporadic rocket fire has come from the Gaza Strip this year and has been met with retaliatory Israeli attacks, with the military making at least 49 incursions into the enclave since the start of 2015, according to the UN Office for the Coordination of Humanitarian Affairs.

Last month an Israeli airstrike killed a two-year-old Palestinian and her pregnant mother inside their home.

The Israeli army said at the time the strikes targeted ‘two Hamas weapon manufacturing facilities in the northern Gaza Strip,’ and made no mention of hitting civilian homes.

Editor’s note: The majority of these weapons are crude shells constructed of little more than tubes with dynamite placed inside. They are fired blindly, without any possibility of aiming them. Injuries and damages are seldom reported, let alone in contrast with the devastation incurred by Israeli air and ground assaults.